The August numbers saw a substantial weakening in the state’s recovery progress. While the US as a whole continued to post job numbers above the pre-pandemic high, the California job numbers returned to the overall weakening trend seen over the past 11 months, while employment suffered a small loss. Compared to the February 2020 pre-pandemic highs, California was still 0.3% short of the recovery mark for nonfarm wage and salary jobs, and 0.9% short for employment. 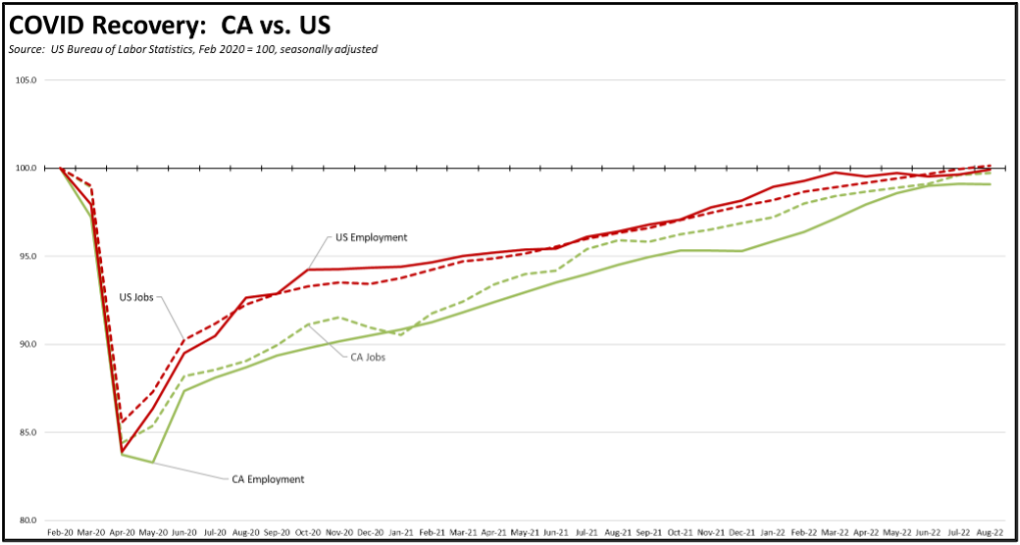 Overall, the number of states besting the pre-pandemic jobs level saw stronger improvement rising from 15 to 19. California rose only marginally to the 24th highest measured by recovery rate. The currently most vibrant portion of the national economy remains in an interior arc running from the top of the Inter-mountain to the Southeast states. 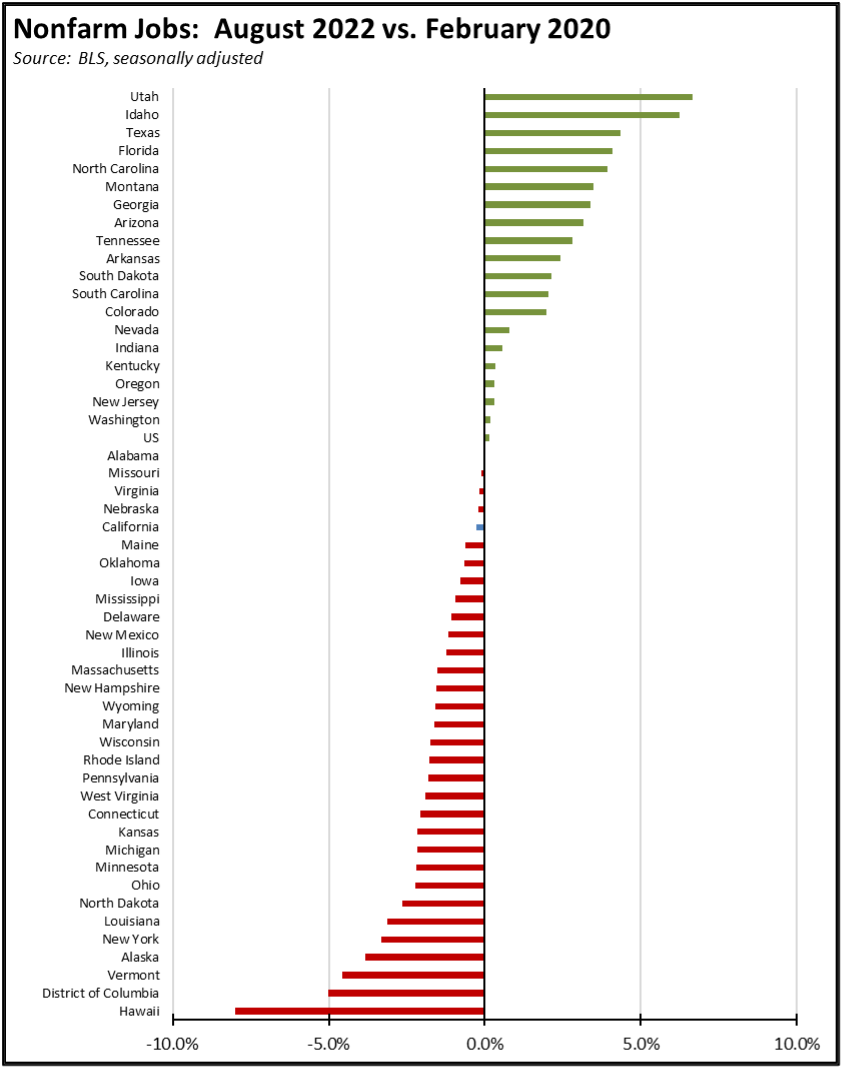 In the employment numbers, California remained at 34th highest among the states when measured by a return to the pre-pandemic employment peak, while 28 states showed more people working than before the pandemic and providing the work force essential to expanding jobs. The state’s unemployment rate rose to 4.1%, matching the pre-pandemic level in February 2020 and coming in as the 10th highest among the states and DC. Overall, 34 states including California had unemployment rates at or below the February 2020 level. 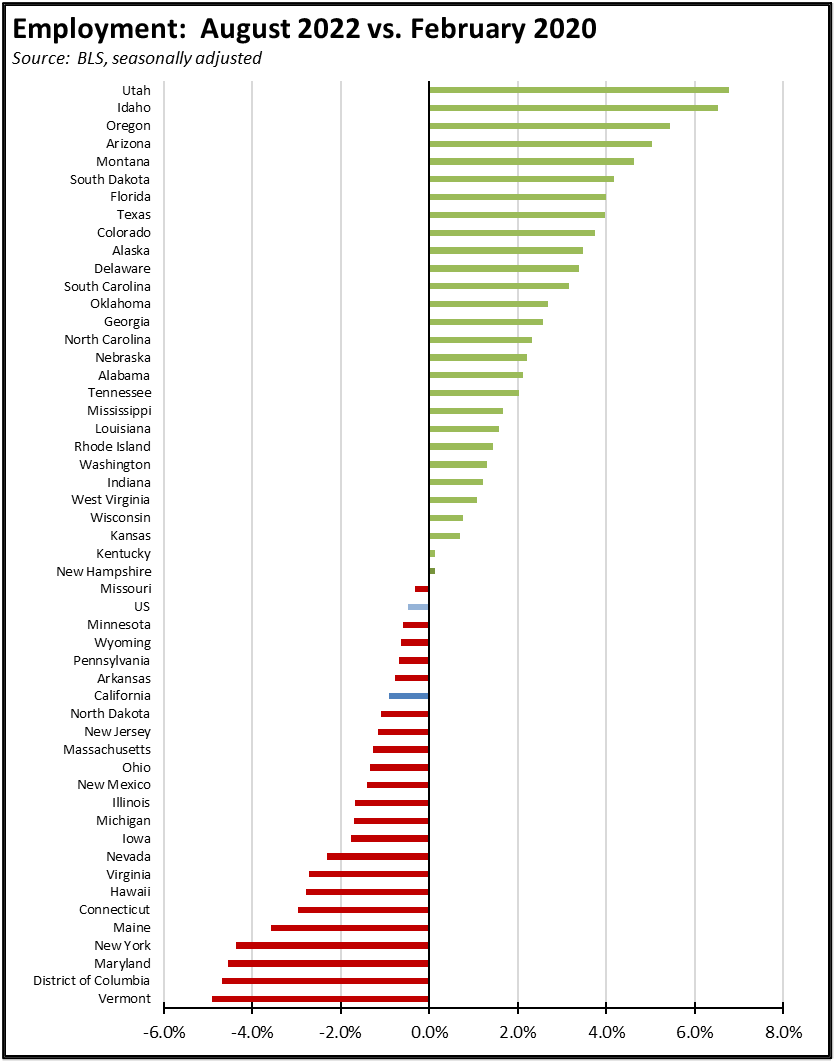 The unemployment insurance claims data began showing improvement, with the number of initial claims (4-week moving average) falling below the pre-pandemic 2019 average. In the latest results (weeks of August 27 through September 10), the weekly average was 11% below the 2019 levels. Other states continue to emphasize return to work more strongly than California’s continued focus on benefits, with initial claims in the other states substantially lower at 24% below. For the past 4 weeks ending with the week of September 10, California initial claims were 21% of the national total, while insured unemployment (a proxy for continuing claims) in the 4 weeks through the week of September 10 was 22% of the total. 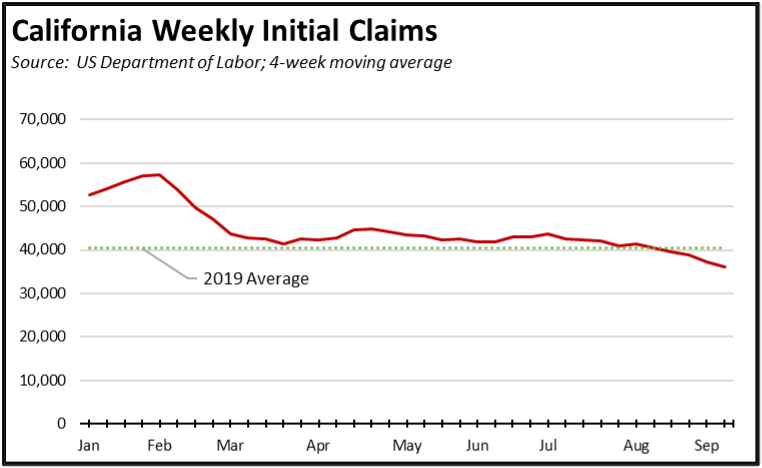 Massachusetts became the latest state to pay off its federal unemployment insurance trust fund debt, through a bond issued to both retire the debt and restore its state fund to a level sufficient to ward off state wage tax hikes. Both steps were taken in order to avoid raising taxes on employment as that state continues its recovery process. This action increasingly isolates California as the primary state relying on debt to fund its unemployment insurance program rather than using its federal pandemic recovery funds—as explicitly authorized in the appropriations—for this purpose as have other states. 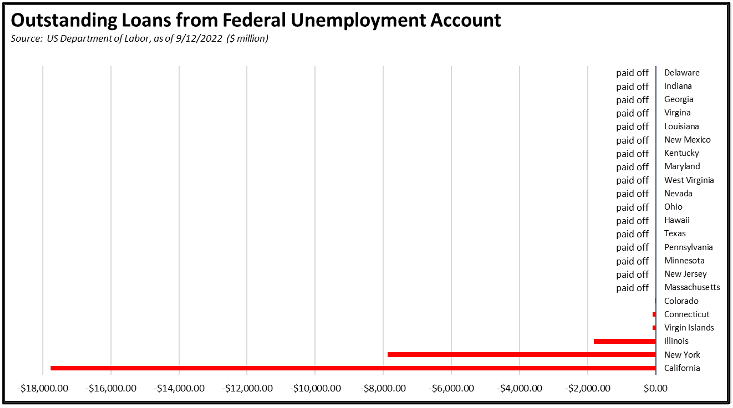 The August numbers show employment essentially unchanged with a loss of 3,900. Unemployment rose by 36,300. The labor force rose by 32,400.

California nonfarm wage and salary jobs took several steps back from last month’s stronger results, and resumed the overall weakening trend with a gain of only 19,900, the lowest monthly gain since last September.

Nonfarm jobs nationally were up 315,000, the lowest monthly gain so far this year but sufficient to put the nation 240,000 jobs ahead of the pre-pandemic high in February 2020.

With the weaker August numbers, California remained at regaining 98% of the nonfarm jobs shuttered in the state shutdowns, while the US as a whole was 1% above. The seasonally adjusted numbers for California showed gains in all but 6 industries, with the increases led by Retail Trade (6,700), Accommodation & Food Services (3,800), and Arts, Entertainment & Recreation (11,400). Losses were led by Information (-3,800), Construction (-1,700), and Transportation, Warehousing & Utilities (-1,700).

Suggesting that last month’s large drop was more a statistical event, unfilled job openings in California at the end of July rose back to the prior level at 1.344 million, the second highest in the current data series. The elevated numbers in this statistic indicate that California has the potential for more substantial jobs growth, but that labor supply especially labor with the requisite skills remains a controlling factor.

The number of counties with an unemployment rate at 10% or more remained at 1. The unadjusted rates ranged from 2.1% in San Mateo to 16.2% in Imperial.