The Center for Jobs and the Economy has released our initial analysis of the June Employment Report from the California Employment Development Department. For additional information and data about the California economy visit www.centerforjobs.org/ca.

The June job and employment numbers remained positive but continued the slowing trend seen over the past 5 months. Nonfarm jobs (seasonally adjusted) came in at 1.1% below the pre-pandemic peak high in February 2020 compared to the US at 0.5% below. California continues to lag overall in recovery and accounts for one-third of the remaining jobs deficit in the nation. 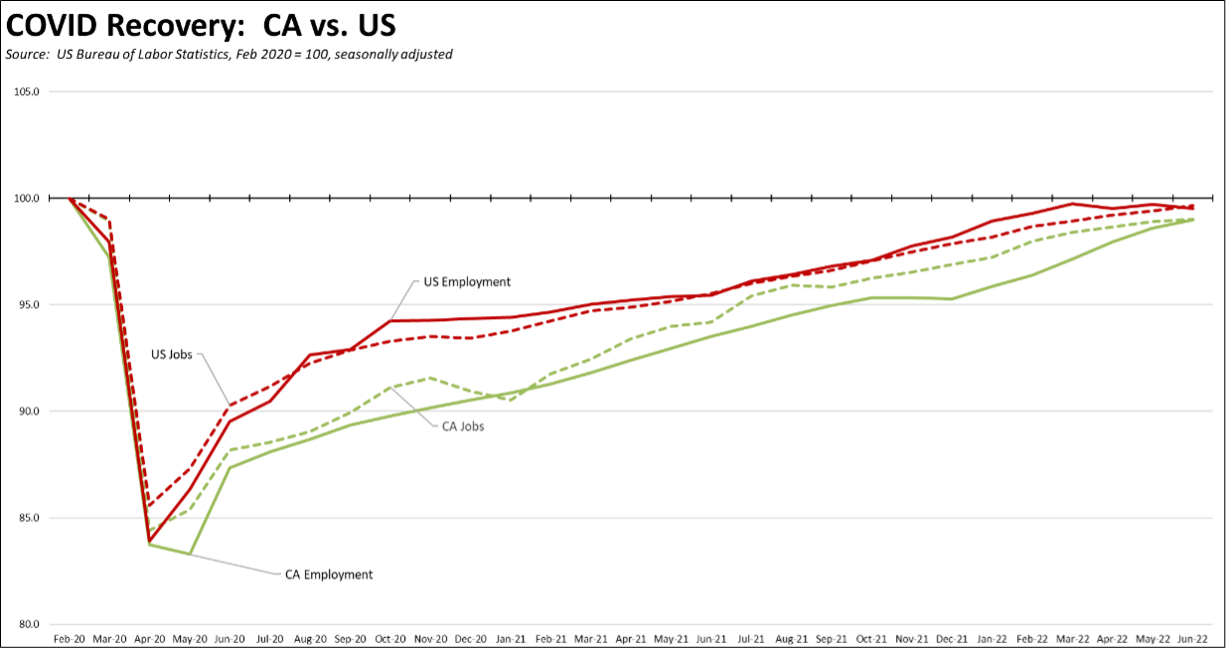 Overall, the number of states besting the pre-pandemic jobs level notched up to 15. California slipped from 23rd to 25th highest measured by recovery rate. 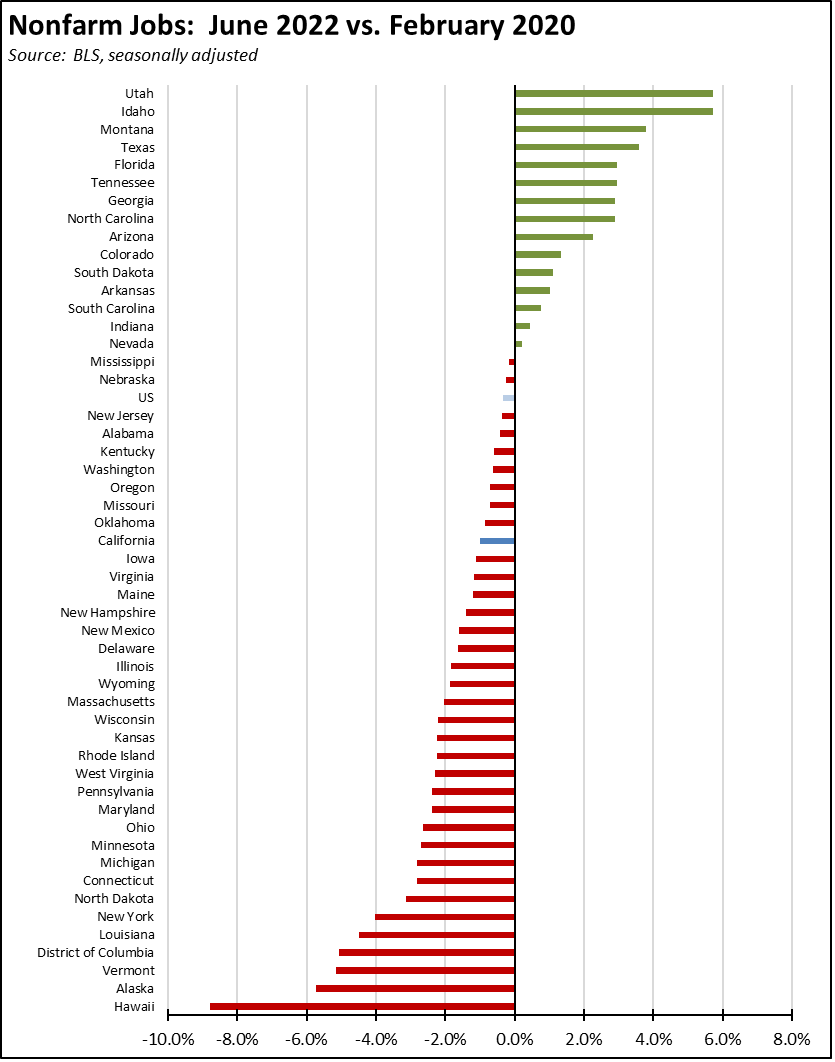 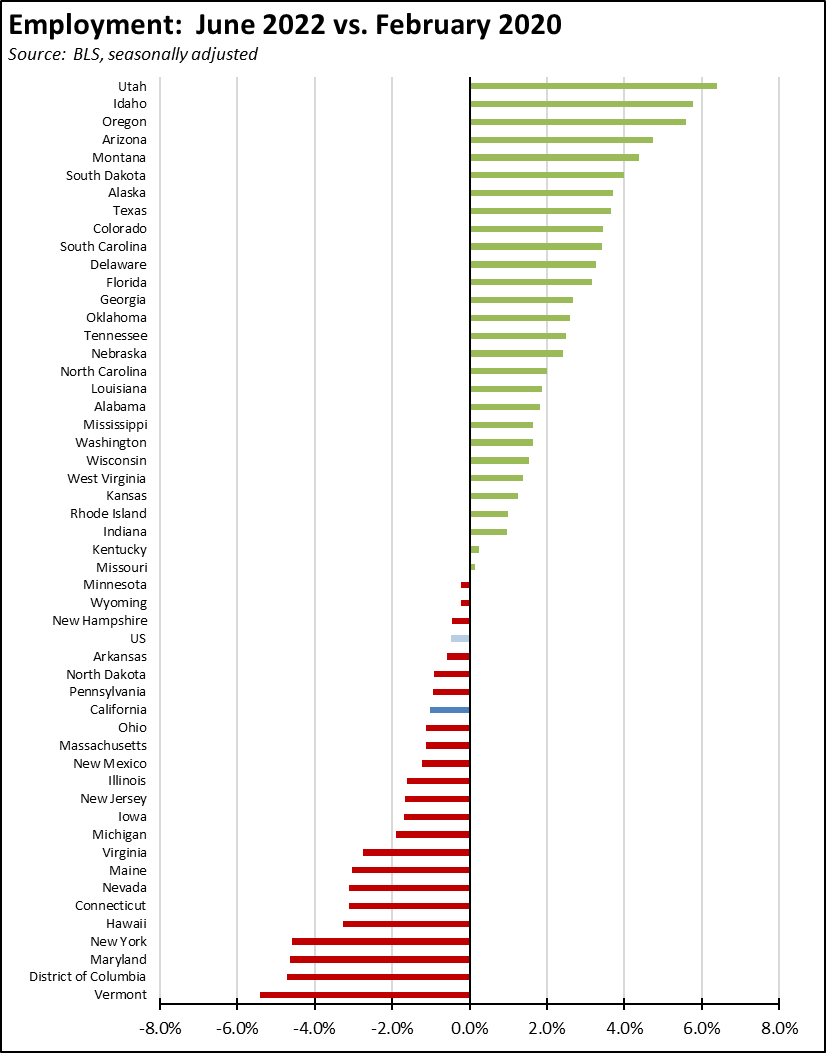 The unemployment insurance claims data also reflects this continuing lag in getting people back to work. Since April, weekly initial claims have trended about 7% above the pre-pandemic average in 2019, while the US total has trended 5% below. For the past 4 weeks ending with the week of July 16, California initial claims were 19% of the national total, while insured unemployment (a proxy for continuing claims) in the 4 weeks through the week of July 9 was 22% of the total. 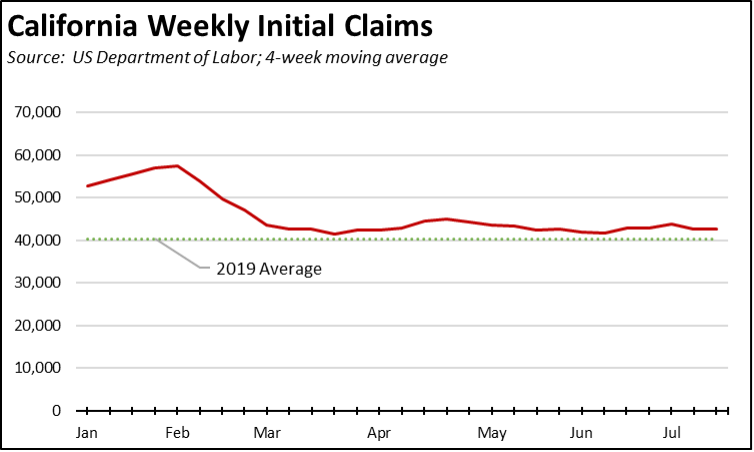 The likelihood of a recession in 2021 appears to be increasing. Real GDP in the first quarter contracted at an annualized rate of 1.6% for the US and 1.0% for California. The most recent results from the Atlanta Federal Reserve Bank GDPNow current indicator tracking suggest another 1.6% contraction in the 2nd quarter as well.

Similar warnings are also beginning to show up in the state’s revenue tracking. For the first month since the 2020 Budget Bill was passed based on a $54 billion deficit assumption, the most recent cash flow report from the Department of Finance indicates revenues fell short of projections rather than greatly exceeding them. Fiscal year-to-date revenues in June came in $2.2 billion below the 2022 Budget Act projections. Personal Income Tax receipts alone came in $4.5 billion lower.

While the June results reflect only one month of receipts, the revenue realities since the $54 deficit figure was put on the table have instead showed sustained growth well above any prior expectations. The June results are the first outlier. It still remains to be seen whether they become a trend.

Yet in spite of these recessionary signs, California remains one of the least prepared states to weather another downturn. While budgetary reserves are now back at levels that could withstand a mild downturn, a number of debts are unresolved and growing.

In particular, California’s unemployment insurance fund is wholly unprepared for another round of renewed demand. In the most recent trust fund solvency rankings, the US Department of Labor shows California near the bottom, coming in only barely above New York and the Virgin Islands.

California also continues to carry by far the largest debt owed to the federal trust fund, while every other state except New York and Massachusetts has substantially reduced or paid off their debt including—as specifically authorized—use of federal pandemic assistance funds for this purpose. 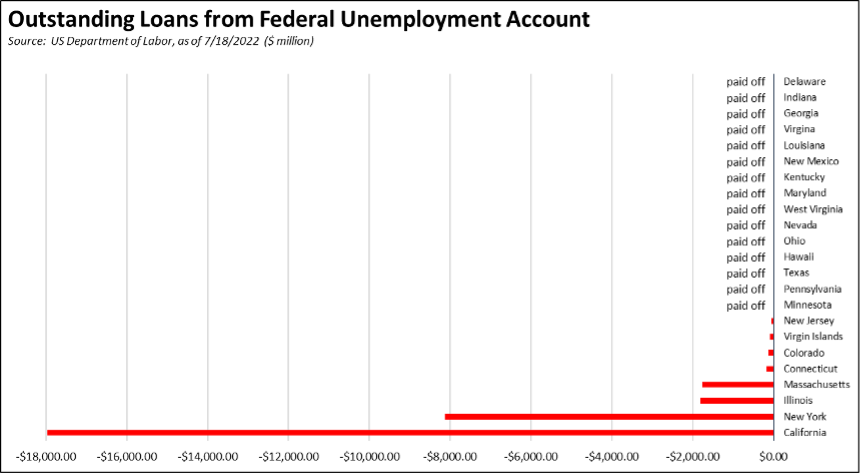 In the most recent budget actions, only $250 million was allocated to retire a portion of the currently $18.0 billion debt. Another $750 million was indicated for this purpose in 2023-24 and $500 million in 2024-25 to offset higher unemployment insurance tax rates for small businesses. These later allocations, however, are statutory and subject to reversal in future budget bills, similar to the situation where an increased Prop 98 share for education from the 2020 Budget Act was later reversed before it came into effect.

Instead, California employers now face a long-term—if not permanent if the fund weakens irrevocably in another downturn—increase in the cost of employing workers, both through higher federal tax rates to pay off the debt and continuation of the highest levels for the state tax rates. The cost of jobs recovery at a time when the state remains behind let alone the cost of preserving jobs in a potential downturn consequently will increase as the result of these budget actions.

The budget did pay off other debts, including $2.9 billion in Prop 2 funds to reduce the unfunded liabilities in the CalPERS state plans. The budget summary indicated this payment will “result in a minimum of $5.8 billion in estimated savings for the state over the next three decades.” Retirement of the unemployment insurance fund dept instead would have resulted in savings previously estimated by LAO of about $5 billion in interest payments over the next one decade.

These potential pension savings, however, were quickly overshadowed as CalPERS announced its current financial results. As of the end of June, the CalPERS fund was down $29 billion for the fiscal year, and lost $61 billion compared to its peak position at the end of December. CalSTRS has yet to report on their results.

The June numbers show the number of unemployed essentially unchanged with a dip of 9,900. Employment rose 75,000. The labor force was up by 65,200.

The reported national numbers show US unemployment rate (seasonally adjusted) again was unchanged at 3.6% for the fourth month in a row. Employment was down 315,000, and unemployment down by 38,000. The labor force was down 353,000.

With the June numbers, California regained 94% of the nonfarm jobs shuttered in the state shutdowns, while the US as a whole recovered 97%. The seasonally adjusted numbers showed gains in all but 7 industries, with the increases led by Accommodation & Food Services (8,400), Health Care & Social Services (5,900), and Government (5,600). Losses were led by Administrative & Support & Waste Services (-7,900), Construction (-6,100), and Arts, Entertainment & Recreation (-3,500).

The number of counties with an unemployment rate at 10% or more remained at 1. The unadjusted rates ranged from 2.0% in San Mateo to 13.0% in Imperial.