The Labor Force data for December 2016 (seasonally adjusted; California preliminary) is shown below, along with the change from the prior month:

The related not seasonally adjusted numbers (California preliminary), with the change from December 2015:

California Employment Development Department’s (EDD) latest release shows on a seasonally adjusted basis, total employment dropped 39,000 from November, while the number of unemployed declined by 29,000. Most of the movement in the unemployment rate came as the labor force went down by 68,000.

California’s seasonally adjusted unemployment rate continued easing to 5.2%. California tied with Washington for the 11th highest unemployment rate among the states. The unadjusted rate dropped from 5.7% in December 2015 to 5.0%.

Total US employment saw a seasonally adjusted increase of 63,000 from November, while the number of unemployed increased by 120,000. The national unemployment rate rose 0.1 points to 4.7%.

California’s participation rate (seasonally adjusted) dropped to 62.5% in December, while the US rate rose marginally by 0.1 point to 62.7%. The California participation rate still remains near the previous lows from 1976, and well below the average pre-recession level of 65.6% in 2007.

EDD reported that between November and December 2016, seasonally adjusted nonfarm wage and salary jobs grew 3,700 in December. November’s gains were revised down slightly to 12,900 from the previously reported gain of 13,600.

Looking at the not seasonally adjusted numbers, hiring saw increases in all but three industries over the year. The change in total payroll jobs from December 2015 saw the largest increases in Government (63,500), Health Care & Social Assistance (54,700), and Professional, Scientific & Technical Services (46,500). Declines were in Manufacturing (-7,300), Mining & Logging (-2,200), and Administrative & Support & Waste Management Services (-1,600).

Unemployment rates (all data is not seasonally adjusted) continue to vary widely across the state, ranging from 3.5% in the Bay Area to nearly three times as large at 9.5% in the Central Valley.

Containing just under 20% of the state’s population, the Bay Area was responsible for 45.2% of the net growth in employment since the pre-recession peak in 2007. Los Angeles Region, remaining in third place behind Inland Empire, has only 15.6% of net employment gains and just under 30% of the total population. 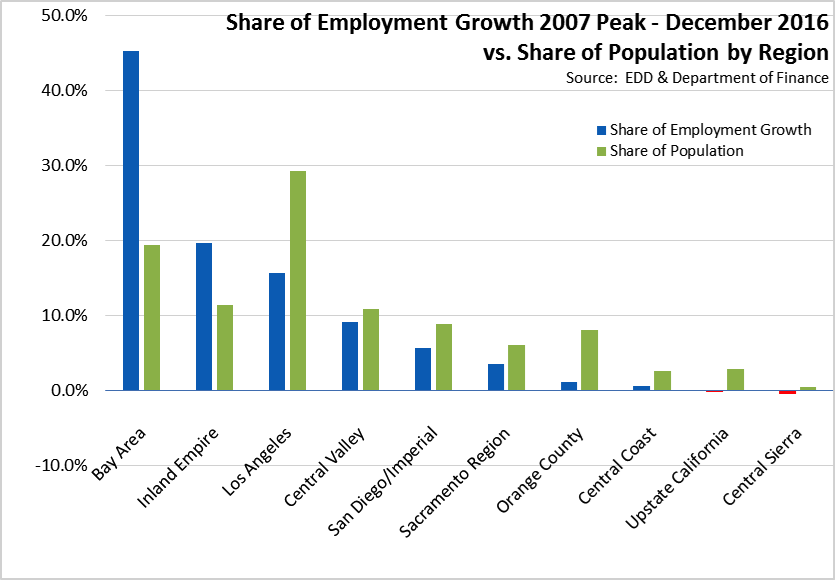 In his recently released Budget Proposal, the Governor highlighted the current pattern of jobs growth as one of the key factors behind the projected slowing revenues:

Much of the employment growth since the budget signing has come from workers newly entering or reentering the labor force. Combined with the recent increases in the minimum wage, this means a greater share of wages is now going to lower‑income workers. For example, over the last four years, the percentage of wage and salary growth from high‑wage sectors dropped from 50 percent to 36 percent of total growth. From an income distribution standpoint, this is a positive development. From a revenue standpoint, however, this is negative due to California’s progressive tax structure.

Analysis of the updated jobs data shows how this two-tier wage trend is playing out on the district level. Two comparisons are shown in the following tables: (1) the shorter term annual job change from 2015:Q1 to 2016:Q1 and (2) the longer term shift in the local jobs structure that has occurred, comparing the pre-recession levels in 2007:Q1 to 2016:Q1.

The longer term trends showing the structural changes from just prior to the recession fully illustrate the shift identified in the Governor’s Proposed Budget:

As always, additional district data, including the Congressional District data, is available in the Employment Data Tool section of the Center’s web site.