The potential effects on the state economy continue to expand as the emergency social distancing measures have now been extended through at least the end of April for the US and in California under Executive Order N-33-20 “until further notice” but based on indications from the Governor’s Office, likely into at least May.

The February employment and jobs data just released by EDD are based on surveys done the week of February 12. Consequently, they do not yet reflect effects coming from measures taken within the US and California to combat COVID-19, but they begin to indicate effects coming from global supply chain disruptions related to the original outbreaks in China. These effects in particular are shown in the unadjusted numbers for Transportation & Warehousing and Retail Trade which dropped more strongly from January. Additional information will be shown in the March numbers scheduled for release on April 17, although due to the fact they will be based on surveys from the week of March 12, they also will still reflect effects of the supply disruptions more than effects of the current closures. A more complete accounting will first be seen in the April numbers scheduled for release on May 22.

As a base indicator tool to summarize these changes as they occur, the following chart contains the most recent employment estimates by industry along with the 12-month change taken from the revised data for the same month in the prior year.  The data used is the unadjusted numbers to show actual job levels held by Californians rather than the statistical levels from the seasonally adjusted data, and to enable use of the average wage and hours worked numbers where available from this series.  The 2019 data will continue to be used for the pre-COVID base comparison. Month-to-month changes will still be instructive to indicate which industries and areas are being the most affected, but the year over year comparison allows seasonal factors to be taken into account. Within this chart, note that “employment” is the number of persons age 16 and over working, including wage & salary jobs, self-employment, and non-paid family workers in the civilian workforce.  “Jobs” are the number of wage & salary jobs, with individual workers holding one or more of these jobs.

WARN Act data provides an early indicator of job reductions. The California and Federal WARN Acts require employers to give a 60-day notice prior to a facility closure or mass layoff.  While the Governor has paused the associated penalties for not meeting the requirements, the requirements themselves remain in place. In March (reporting as of March 25), the number of affected employees jumped to 18,998 compared to an average of 7,051 in the prior 8 months. Only 3,528 employees were affected by permanent closures concentrated primarily at the beginning of the month, with notices in the second half almost solely temporary closures.

Another early indicator will be through weekly initial claims for Unemployment Insurance (UI).  For the week ending March 21, California’s initial claims jumped 129,203 over the prior week to 186,809. California’s reported total was the third highest behind Pennsylvania’s estimated 378,908 and Ohio’s estimated 187,784. Expressed as a percentage of the February labor force, California was 39th highest at a weekly claims rate of 1.0% compared to Rhode Island at 6.3%, Nevada at 6.0%, and Pennsylvania at 5.8%.  While reflecting a sharp upward spike in absolute numbers, California’s relatively lower rate indicates that the economic effects are only beginning.  The weekly reports are issued each Thursday. Demographic information and claims by industry are contained in the monthly data.  Most state UI programs, including California’s, are largely unprepared, however, for a continued upsurge in claims.

Share of Jobs That Can Be Done From Home 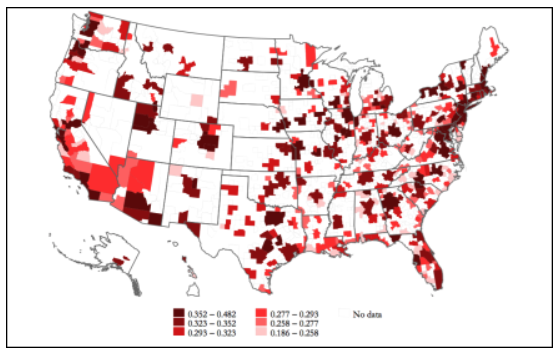 Source: Jonathan Dingel and Brent Neiman, How Many Jobs Can be Done at Home?, White Paper, Becker Friedman Institute, University of Chicago, March 2020

Unemployment Unchanged at 3.9%; Employment Up Only 500

EDD reported total employment (seasonally adjusted; February preliminary) was up only 500 from the revised January numbers, while the number of unemployed dipped 5,800.  Unemployment rate remained at the series low of 3.9%.  The unadjusted rate was down 0.2 point from the year earlier to 4.3%.

California edged up to the 11th highest unemployment rate among the states.

Total US employment saw a seasonally adjusted gain of only 45,000, with the number of unemployed down by 105,000.  The unemployment rate dipped to 3.5%, again reaching the lowest point since 1969.

For the 12 months ending February 2019, the seasonally adjusted data shows the California labor force was up 210,700 workers (1.1% growth) compared to the rest of the US gain of 1.7 million (+1.2%).  Much of the California improvement, however, comes from the downward revision of the labor force numbers for the first half of 2019.

The total number of persons employed (seasonally adjusted) over the 12 months ending in February grew by 210,700.  As a result, California rose to 3rd highest among the states in terms of absolute employment growth over the year, with Texas leading with an additional 269,700 persons employed over this period, and Florida in second place with a gain of 252,700.

Adjusted to account for differences in the size of each state economy, California over the year grew by 1.1%, just below the average for the rest of the US with a gain of 1.2%.  Ranked among the states, California’s growth rate edged down to 25th in large part due to the annual data revisions, with Arizona again leading with 3.2% growth.

While the job numbers show growth continuing at near the previous pace prior to the current emergency, comparison with the employment numbers suggests the data does not reflect actual addition of new jobs.  The seasonally adjusted employment shows a net addition of only 500, while the underlying unadjusted numbers show employment growth at about only 1/3 the level for February in recent years.  As such, the relatively favorable numbers more likely reflect a shift of employment status from self-employment and independent contractor to wage & salary under the terms of last year’s AB 5 rather than creation of new jobs.  This legislation will continue to affect the jobs numbers as well as contribute to the uncertainty faced by both employers and workers during the current emergency and the upcoming recovery period.

Adjusting for population size, California dropped to 25th among the states, with a 12-month jobs growth rate of 1.1% compared to the rest of the US at 1.2%.

As economic disruptions began to be felt in supply chains due to the situation in China, declines were led by Manufacturing ($95.6k), Retail Trade ($36.7k), and Wholesale Trade ($78.3k). 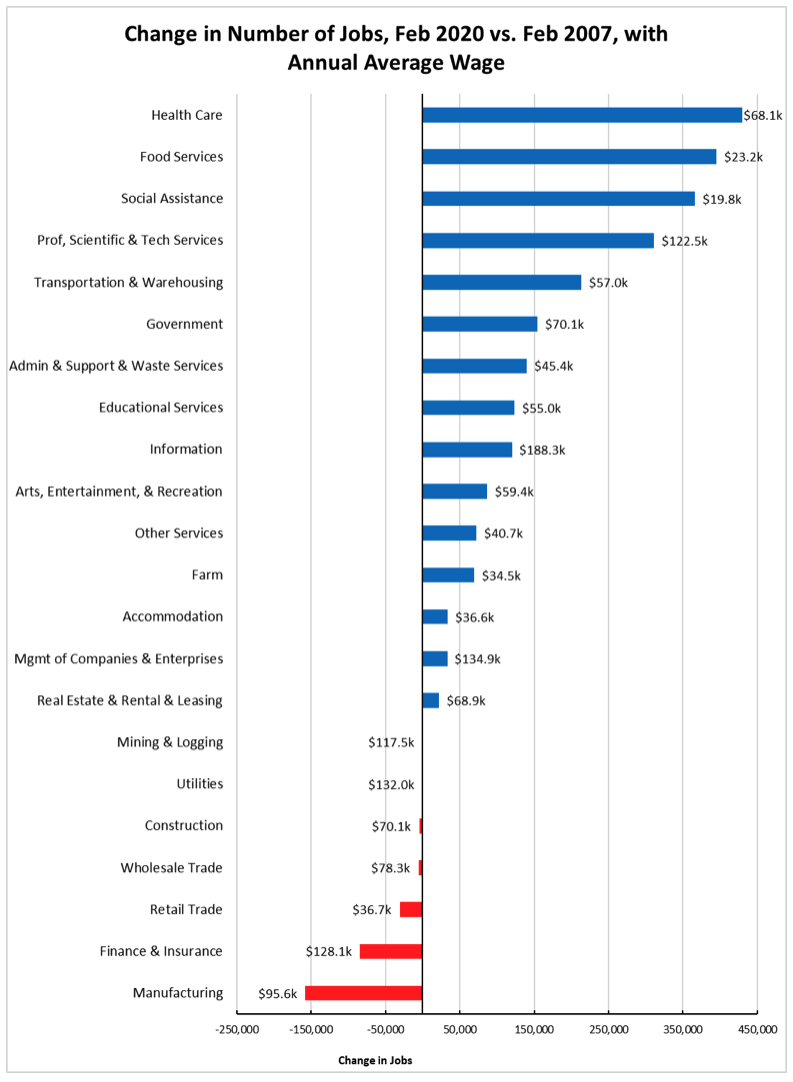 The legislative district data has been revised to incorporate the county labor force updates and the 2018 American Community Survey factors.  The full estimates are now available on the Center’s web site.

Containing 19.5% of the state’s population, the Bay Area has accounted for 36.6% of net employment growth compared to pre-recession levels.  Los Angeles Region, with 28.9% of the population, accounted for only 21.4% of net employment gains.  Inland Empire remains the third highest under the revised county labor force and population numbers, while Central Valley now shows equivalent growth across both metrics. 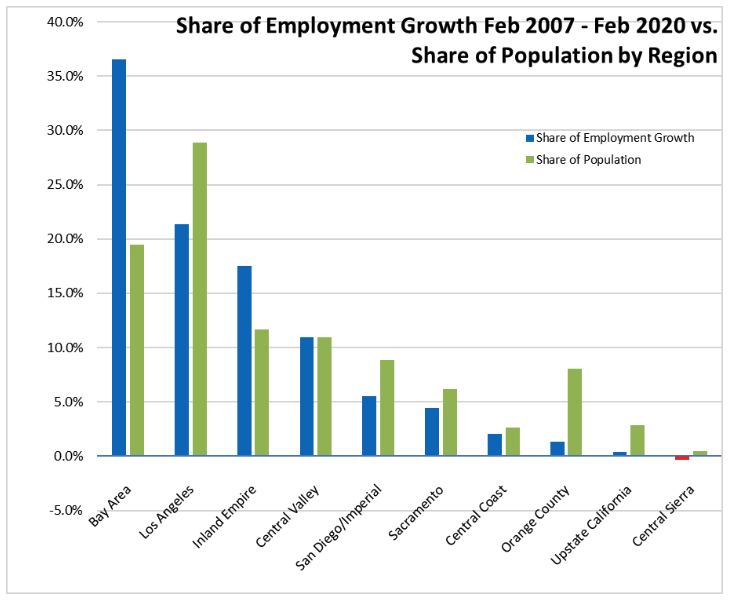 Of the 21 Metropolitan Statistical Areas (MSAs) with the worst unemployment rates in January 2020, 11 are in California, including El Centro MSA (Imperial County) which continues with Great Depression-era levels of unemployment that are 8 times worse than in San Mateo, the county with the lowest unemployment rate.