The Labor Force data for June 2016 (seasonally adjusted; California preliminary) is shown below, along with the change from the prior month:

The related not seasonally adjusted numbers (California preliminary), with the change from June 2015:

Total US employment saw a seasonally adjusted increase of only 67,000, while the number of unemployed increased by 347,000.  The US unemployment rate rose from 4.7% in May to 4.9% in June.

California’s participation rate (seasonally adjusted) remained unchanged from May 2016 at 61.9%.  The comparable US rate increased 0.1% to 62.7%.

The labor force participation rate has direct implications to a range of current policy challenges.  As households have fewer income earners, the disparity in household incomes increases while the ability of households to afford the state’s continuously rising housing costs decreases.  This relative decline in employed also translates into a relatively smaller tax base for state government finances, increasing the overall volatility of a system that is increasingly dependent on the incomes of only a few income earners.  The 4% drop since 2008 represents 1.2 million Californians who are not now in the labor force; the 5.3% drop from the prior 2001 peak represents 1.6 million.  While some of this shift can be attributed to demographic changes, California has a relatively younger population than the US average and like the rest of the US, has seen increases in the age at which workers retire, yet the state’s participation rate has remained below the US average since 2002.

Between June 2015 and June 2016, Bureau of Labor Statistics (BLS) data shows the total number of employed in California increased by 308,211 (seasonally adjusted), or 13.0% of the total net employment gains in this period for the US.  Measured by percentage change in employment over the year, California was 22nd highest.  Adjusted for population, California ranked 21st.

EDD reported that between May and June 2016, seasonally adjusted nonfarm payroll jobs increased by 40,300.  May’s gains were revised upwards to 27,500 from the previously reported gain of 15,200.

Looking at the not seasonally adjusted numbers, hiring saw increases in all but 2 industries.  The change in total payroll jobs from May 2016 saw the largest increases in Accommodation & Food Services (15,500), Arts, Entertainment & Recreation (14,900), and Professional, Scientific & Technical Services (11,900).  Declines were in Government (-2,900) and Educational Services (-11,500) as schools began to enter the summer vacation period.

By total number of new jobs, California had the highest increase in seasonally adjusted nonfarm jobs among the states from June 2014 to June 2015, at 461,100 or 18.8% of the US net increase.  By percentage growth in jobs, California was 7th highest, and by population adjusted jobs growth, 9th highest.

Unemployment rates (all data is not seasonally adjusted) continue to vary widely across the state, ranging from 4.2% in the Bay Area to more than double at 9.7% in the Central Valley. 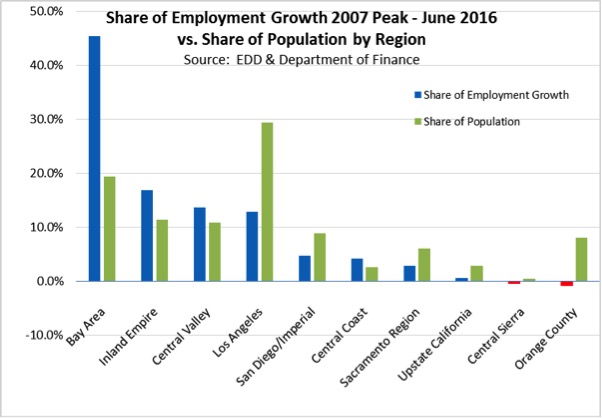