The Labor Force data for June 2018 (seasonally adjusted; California preliminary) is shown below, along with the change from the prior month:

The related not seasonally adjusted numbers (California preliminary), with the change from June 2017:

California Employment Development Department’s (EDD) latest data shows on a seasonally adjusted basis, total employment edged down 8,900 from May, while the number of unemployed notched up by 5,700. The labor force eased by 3,200.

California’s seasonally adjusted unemployment rate remained at 4.2%, the lowest level in the current data series that began in 1976, as the labor force continued to move downwards for the fourth month in a row. California tied with North Carolina for the 19th highest unemployment rate among the states. The unadjusted rate dropped from 4.8% in June 2017 to 4.5%.

Total US employment saw a seasonally adjusted gain of 102,000 from May, while the number of unemployed grew by 499,000 as the total labor force expanded by 601,000. The national unemployment rate rose to 4.0%.

California’s participation rate (seasonally adjusted) in June fell another 0.1 point to 62.0%, while the US rate rose to 62.9%. The California rate matched the revised series low reached previously in 2015.

California’s labor force grew only 39,900 over the year ending June 2018, or 0.2% growth. The US as a whole grew 1.9 million – a 1.2% expansion. While workers elsewhere continue to return to the workforce, California’s continued low rate has implications for future growth in the state, including the ability to sustain jobs expansion as fewer workers are available and continued effects on state and local budgets for higher social program spending compared to other states.

EDD reported that between May and June 2018, seasonally adjusted nonfarm wage and salary jobs grew by only 800. May’s results were revised to a 7,200 gain from the previously reported 5,500.

In the not seasonally adjusted nonfarm numbers that allows a more detailed look at industry shifts, hiring saw increases in all but 5 industries over the year. The change in total payroll jobs from June 2017 saw the largest increases in Construction (44,300), Professional, Scientific & Technical Services (39,300), and Social Assistance (30,400). Declines were in Wholesale Trade (-2,100), Finance & Insurance (-1,700), and Other Services (-1,400). 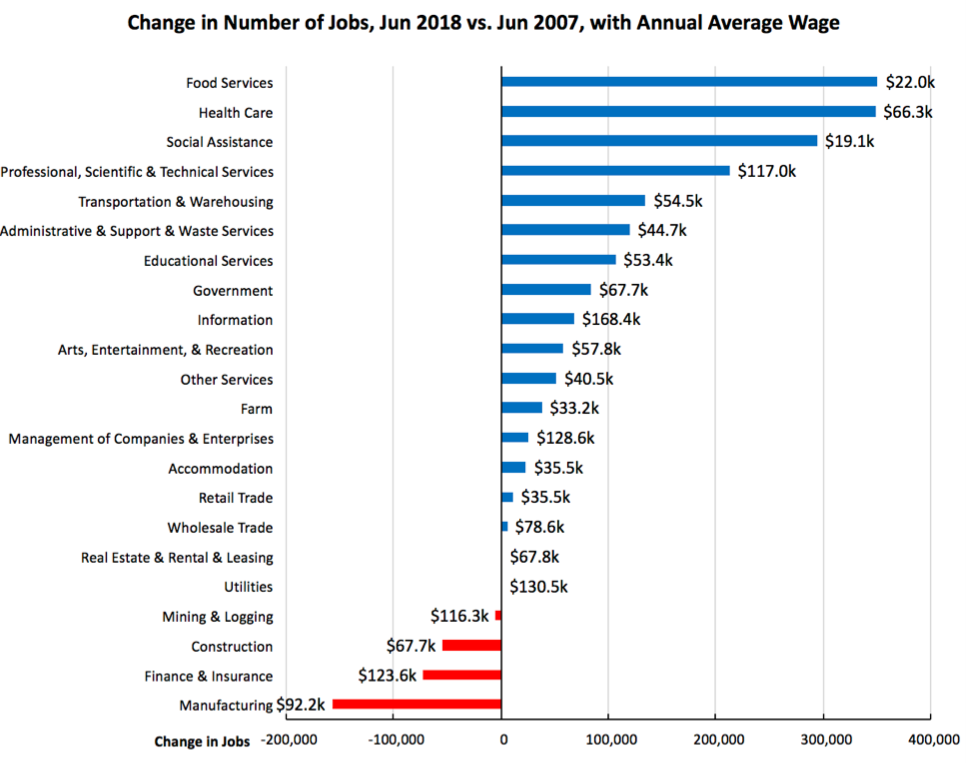 Comparing the number of jobs by industry in June 2018 (not seasonally adjusted), four industries had employment below the 2007 pre-recession levels. The highest gain industries were led by lower wage Food Services, Health Care (with a relatively higher mix of lower and higher wage occupations), lower wage Social Assistance, and higher wage Professional, Scientific & Technical Services. Of the lagging industries, three—Manufacturing, Mining & Logging, and Construction—are blue collar middle class wage industries, while the higher wage Finance & Insurance also remained in the minus column. Construction has overall improved but still remains 54,200 below the 2007 level, and 102,700 (10.6%) below the previous high in 2006.

In addition, higher wage Utilities and middle class wage Real Estate, Rental, & Leasing notched close to their 2007 levels, with a combined total of only 1,900 jobs in the plus column. In spite of trade jitters, blue collar-middle class wage Transportation & Warehousing continued growing.

The following chart illustrates the trend for total wage and salary jobs by general wage level, according to the industry wage classification used previously in other Center analyses of this issue. As indicated, nearly half (47%) of net jobs growth since the recession has been in the lower wage industries. For the 12 months ending June 2018, lower wage industries accounted for about a quarter (24%) of new jobs, while middle class-blue collar jobs produced over a quarter (30%) as Construction levels remained higher compared to prior years. 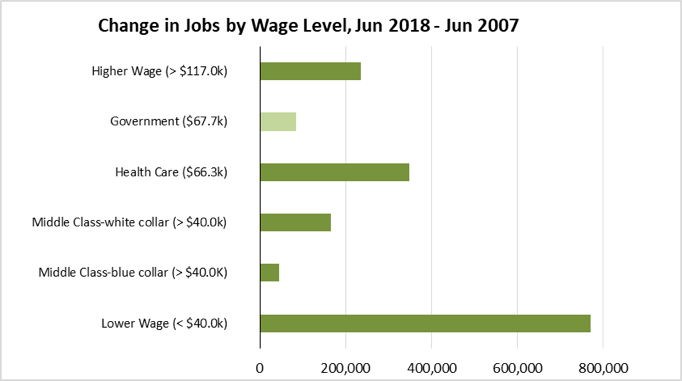 The level of unemployment rates (all data is not seasonally adjusted) continues to vary widely across the state, ranging from 3.1% in the Bay Area to more than twice as large at 7.9% in the Central Valley.

Containing 19.4% of the state’s population, the Bay Area was responsible for 39.6% of the net growth in employment since the pre-recession peaks in 2007. Los Angeles Region, containing 29.2% of the population, accounted for the second largest share at 20.0%. Inland Empire is the only other region—at a growing margin—continuing to show employment gains above their population share. 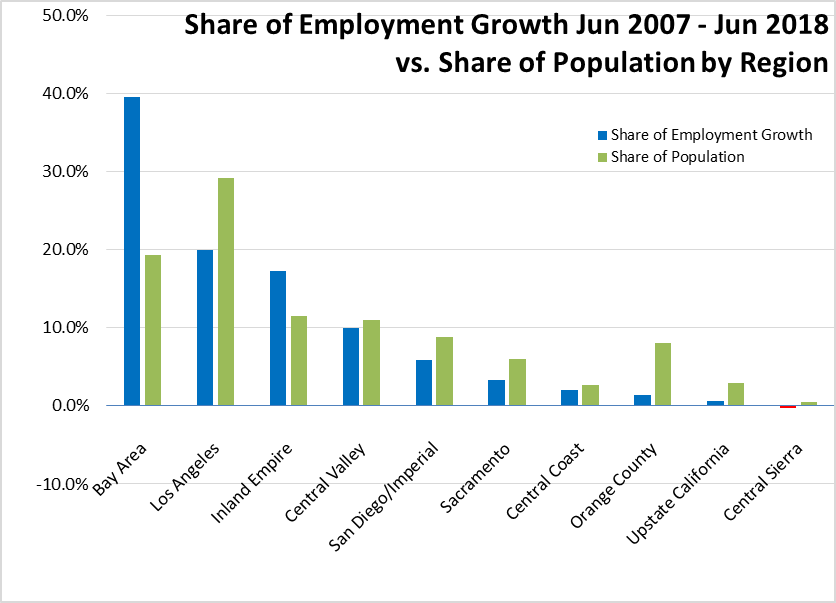