EDD reported total employment (seasonally adjusted; June preliminary) was down 45,300 from the revised May numbers, while the number of unemployed was down 12,400. Unemployment rate was unchanged at 4.2%. The unadjusted rate was down 0.3 point from the year earlier to 4.1%.

Total US employment saw a seasonally adjusted gain of 247,000, with the number of unemployed rising 87,000 as the national labor grew. The unemployment rate notched up to 3.7%.

wpDataTable with provided ID not found!

For the 12 months ending June 2019, the seasonally adjusted data shows the California labor force grew only 0.3% compared to the rest of the US at 0.6%. 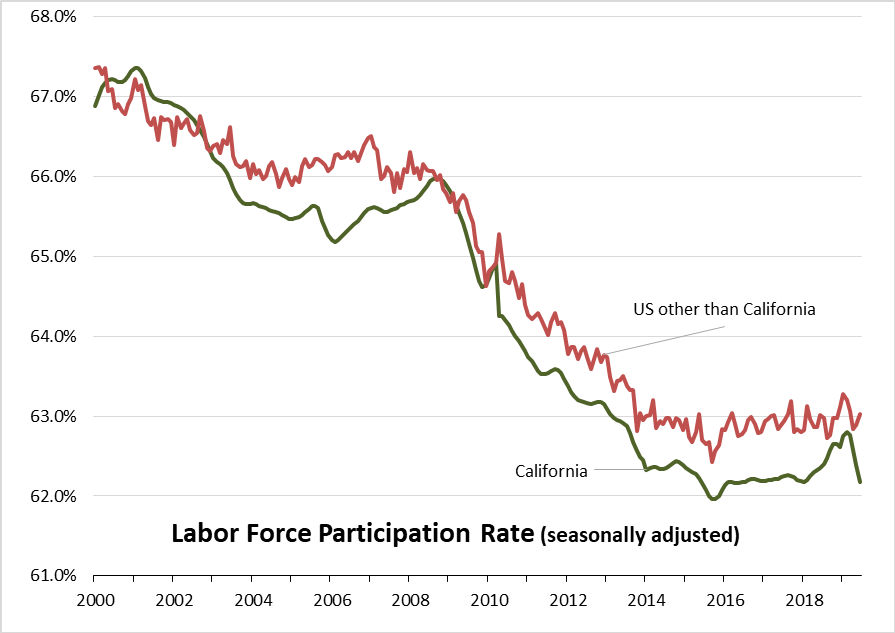 In another sign of the economy’s slowing, the total number of persons employed (seasonally adjusted) over the 12 months ending in June grew by only 58,000. California dropped to 9th place with Texas leading with an additional 240,800 persons employed over this period, and Florida in second place with a gain of 139,400.

Based on percentage growth, California had a 0.3% expansion in employment, below the average for the rest of the US at 1.0%. Ranked among the states, California’s growth rate dropped to 39th place, while Tennessee led at 3.1%.

Adjusting for population size, California came in at 14th among the states, with a 12-month jobs growth rate of 1.7%

Jobs growth within the traditional middle class wage—especially blue collar industries such as Manufacturing, Construction, and Mining & Logging—continues to lag with the heavily blue collar Utilities beginning to show shrinkage as well. After stronger gains during the recovery, both Wholesale and Retail Trade have continued to show weakness, reflecting competitive pressures from nontraditional channels as well as greater use of technology in response to growing costs for labor, energy, rent, and regulation. Finance & Insurance also continues to lose ground.

Construction has gained in the past year as activity has picked up. Construction jobs remain 12,700 below the 2007 peak and 59,200 (6%) below the pre-recession high in 2006. Over half (vs. 2007) of these gaps are due to reduced activity in Residential Building Construction. 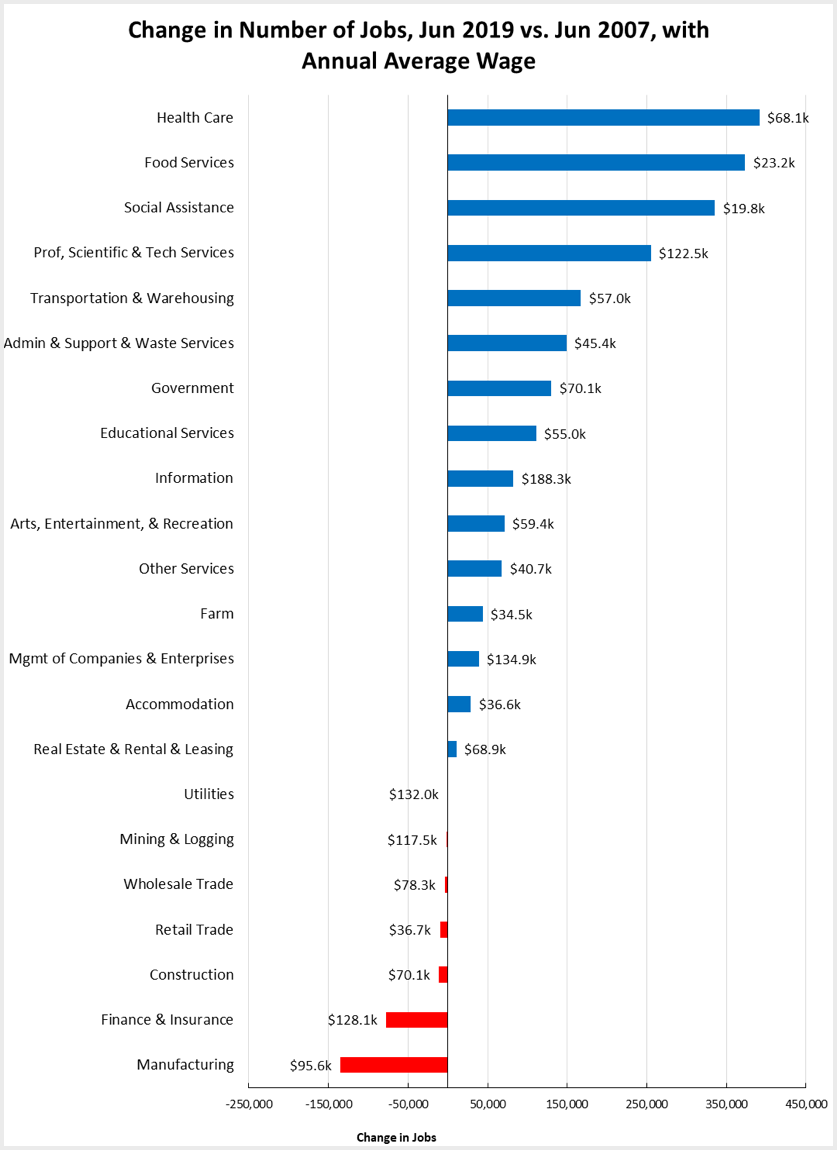 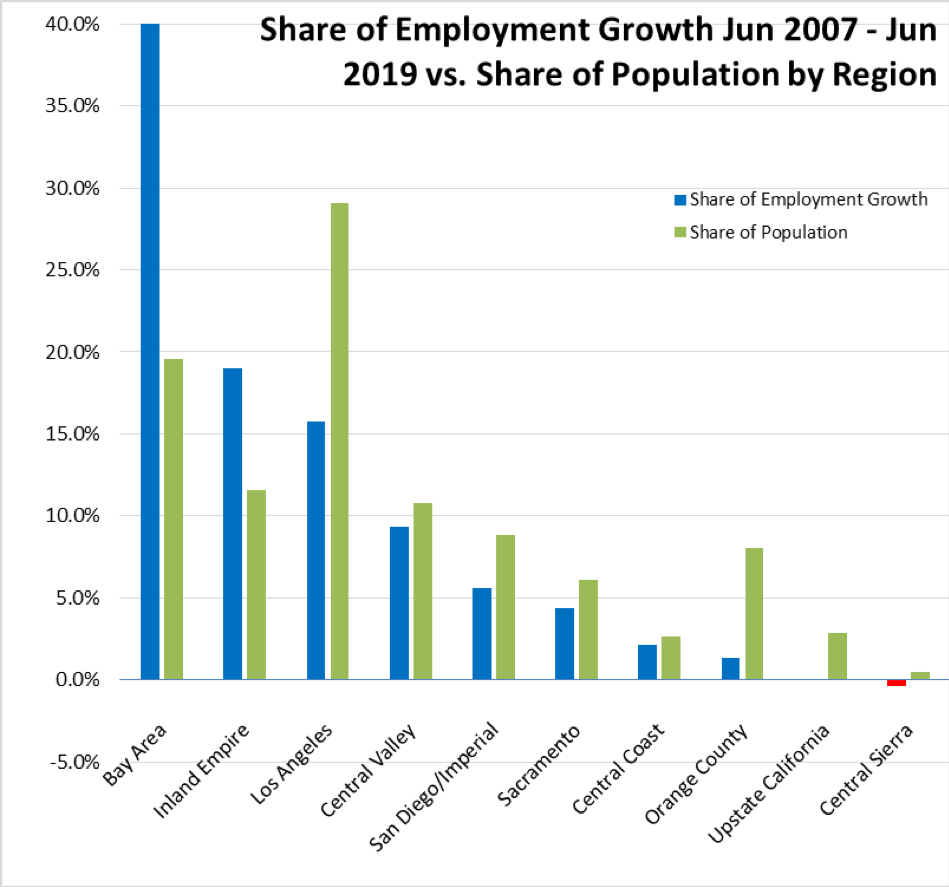 Figure Source: US Bureau of Labor Statistics, May 2018 data

Chart of the Month: Economic Confidence

One of the more closely watched national economic indicators is the consumer confidence survey, looked to as a signal of changes related to the large consumption component of GDP and consequent changes in the business investment producing jobs growth.

This data is available only on the national level, but a comparable measure in the Center’s Indicators is from Public Policy Institute of California’s (PPIC) survey question asked periodically since September 1999: “do you think that during the next 12 months we will have good times financially or bad times?”

As indicated in the chart below, the “bad times” viewpoint has prevailed during much of the period it was asked, coincident with the ups and downs in the state’s economy beginning with the Dot.Com Bust at the beginning of the century. “Good times” pulled out ahead, however, three years into the recent recovery and held this position for the next four years. 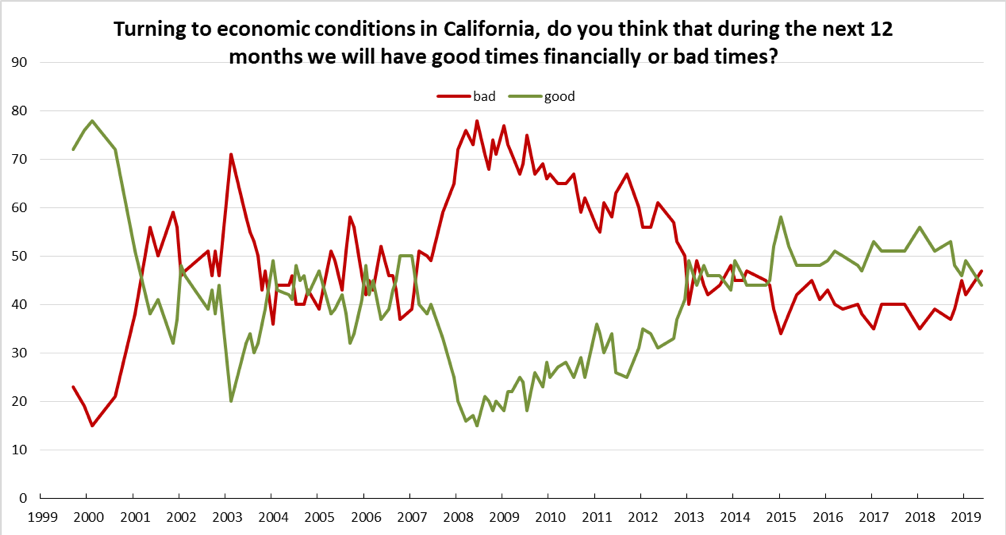 The most recent numbers have again begun to converge and cross, much as they did in the uncertain period leading up to the Great Recession.

The reasons for this convergence are not readily clear. As a tracking question, PPIC does not go into much detail on why, and only reports on how people are feeling about their economic future.

One reason may be that the two responses did not diverge that much to begin with. The recent recovery historically was one of the slowest on record, and in California in particular was a two-tier recovery of jobs primarily at the highest and lowest ends of the wage scale. The continuing small spread in the numbers may reflect the results as to whether the recovery since 2012 has been personally good or only somewhat good.

Another reason may be in how people now define good vs. bad times. Historically, the numbers appear to be more closely tied with personal assessments of employment and income prospects. A growing concern among the California public, however, is that no matter how much their income rises, the costs of living continue to rise even faster. In the most recent May 2019 PPIC poll, 52% of adults indicated that the cost of housing is a financial strain. In the July 2019 Quinnipiac University Poll, 45% indicated they feel like they cannot afford to live in California.