The Labor Force data for March 2017 (seasonally adjusted; California preliminary) is shown below, along with the change from the prior month:

The related not seasonally adjusted numbers (California preliminary), with the change from March 2016:

California Employment Development Department’s (EDD) latest release shows on a seasonally adjusted basis, total employment rose 37,100 from February, while the number of unemployed dropped by 25,100. The labor force grew by 12,100

California’s seasonally adjusted unemployment rate continued easing to 4.9%. California tied with Illinois, North Carolina, and Washington for the 14th highest unemployment rate among the states. The unadjusted rate dropped from 5.8% in March 2016 to 5.1%.

Total US employment saw a seasonally adjusted increase of 472,000 from February, while the number of unemployed dropped by 326,000. The national unemployment rate continued dropping 0.2 point to 4.5%. The national labor force numbers continued expanding by 145,000.

Compared to November 2016, growing business and consumer confidence has seen the national labor force grow by 745,000 and the participation rate by 0.4 percentage points as workers have been drawn back into the labor force. In California, the labor force has remained essentially unchanged (net gain of 4,200), while the rate has dropped 0.2 points.

Between March 2016 and March 2017, Bureau of Labor Statistics (BLS) data shows the total number of employed in California increased by 267,400 (seasonally adjusted), or 15.7% of the total net employment gains in this period for the US. For the second month in a row and for the second month since 2012, California remained in 2nd place behind Florida (which has a civilian working age population only 55% as large as California’s) at 342,000. Measured by percentage change in employment over the year, California dropped to 27th highest. Adjusted for population, California dropped to 28th. Much of the lower California performance is related to the recent labor force data revisions which downsized previous employment estimates in the 2nd half of 2016 by as much as 1.3%.

EDD reported that between February and March 2017, seasonally adjusted nonfarm wage and salary jobs grew by 19,300. February’s gains were revised to 21,500 from the previously reported gain of 22,900. Much of the March gains were weather-driven as breaks in the rains saw Construction alone expand by 18,900.

Looking at the not seasonally adjusted numbers, hiring saw increases in all but three industries over the year. The change in total payroll jobs from March 2016 saw the largest increases in Government (54,900) as tax and fee revenues have continued to expand, Health Care (47,300), and Construction (43,400). Declines were in Manufacturing (-4,900), Mining & Logging (-2,500), and Utilities (-300).

By total number of new jobs, California had the highest increase in seasonally adjusted nonfarm jobs among the states from March 2016 to March 2017, at 346,400 or 15.9% of the US net increase. By percentage growth in jobs, California rose to 10th highest, and by population adjusted jobs growth, 12th highest.

In the January budget proposal, the Governor identified the increasing dominance of lower wage slots in total jobs growth as one of the key factors slowing state revenues growth. The following chart illustrates this trend, according to the industry wage classification used previously in other Center analyses of this issue. In the chart below, Private sector jobs are shown in the dark green bands, while Government is shown in the lighter. As indicated, nearly one-third of jobs growth over the past 12 months has been in the low wage industries. 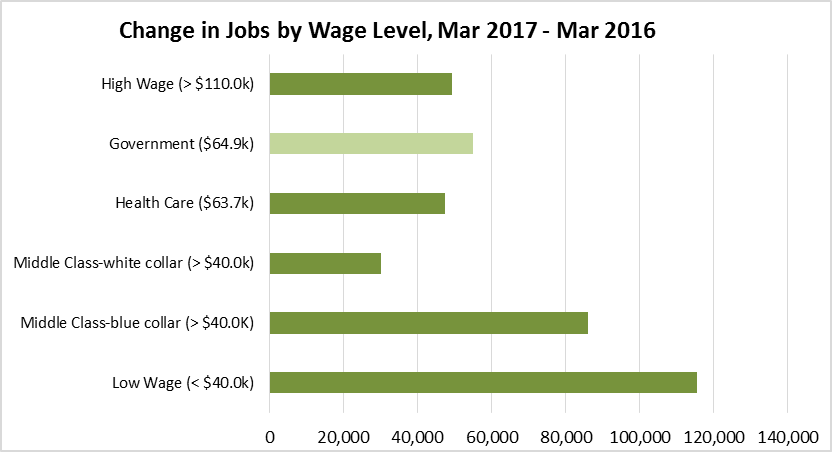 Unemployment rates (all data is not seasonally adjusted) continue to vary widely across the state, ranging from 3.6% in the Bay Area to nearly three times as large at 10.4% in the Central Valley.