The Center for Jobs and the Economy has released our initial analysis of the May Employment Report from the California Employment Development Department. For additional information and data about the California economy visit www.centerforjobs.org/ca.

The May job and employment numbers again showed movement toward recovery, but at somewhat slowing levels from the prior two months. Nonfarm jobs (seasonally adjusted) came in at 1.1% below the pre-pandemic peak high in February 2020 compared to the US at 0.5% below. Employment levels improved to 1.4% below the prior peak, while the US is only 0.3% below. 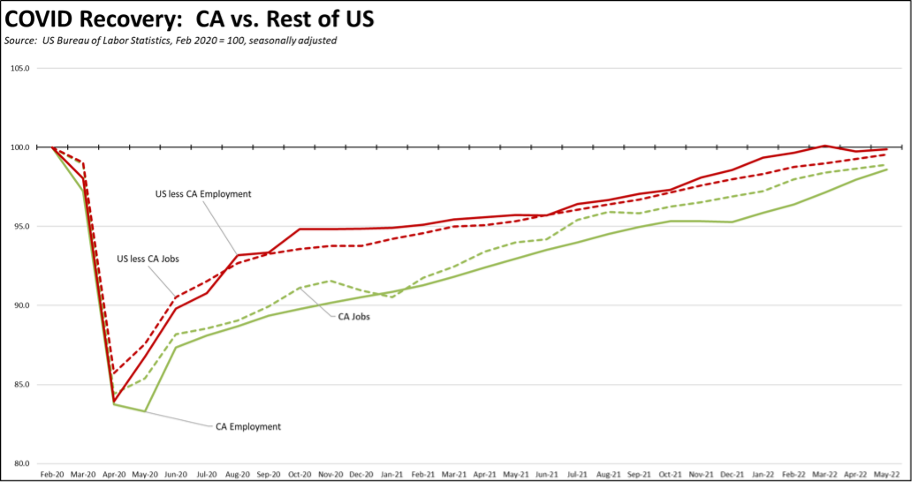 For the second month in a row, California nonfarm job gains at 42,900 came in second behind Texas, which posted jobs growth of 74,200. This outcome is even more significant due to the fact that Texas’s performance represents fundamental growth—nonfarm jobs are now 3% above pre-pandemic levels in that state—while California is still struggling to pass that recovery level. In terms of recovery to the pre-pandemic levels, California’s position notched up to the 23rd highest, while the number of states above the pre-pandemic job levels remained at 14. 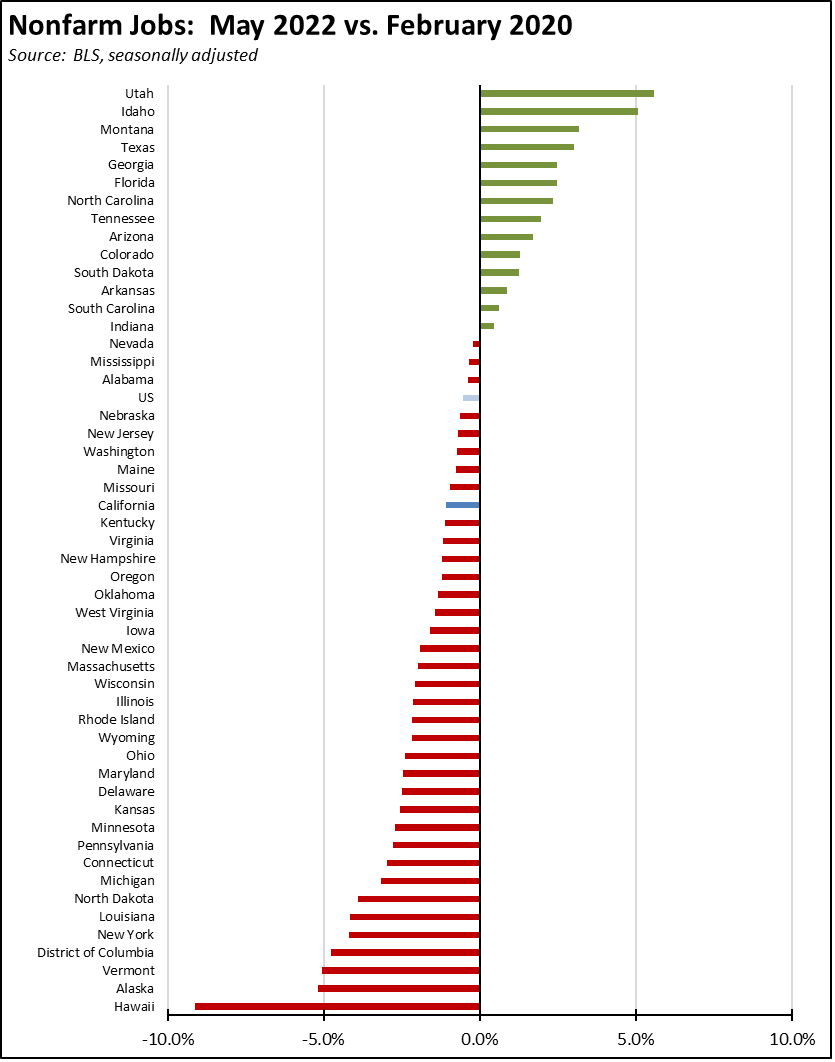 The employment results showed less movement as state policies—as represented in the recent budget proposals and actions—continue to emphasize benefits over stronger actions to return workers to jobs. California improved only marginally to 37th highest among the states when measured by a return to the pre-pandemic employment peak, while more than half the states (28) again showed more people working than before the pandemic. The state’s unemployment rate improved to 9th highest among the states, while 31 states had unemployment rates at or below the February 2020 level. 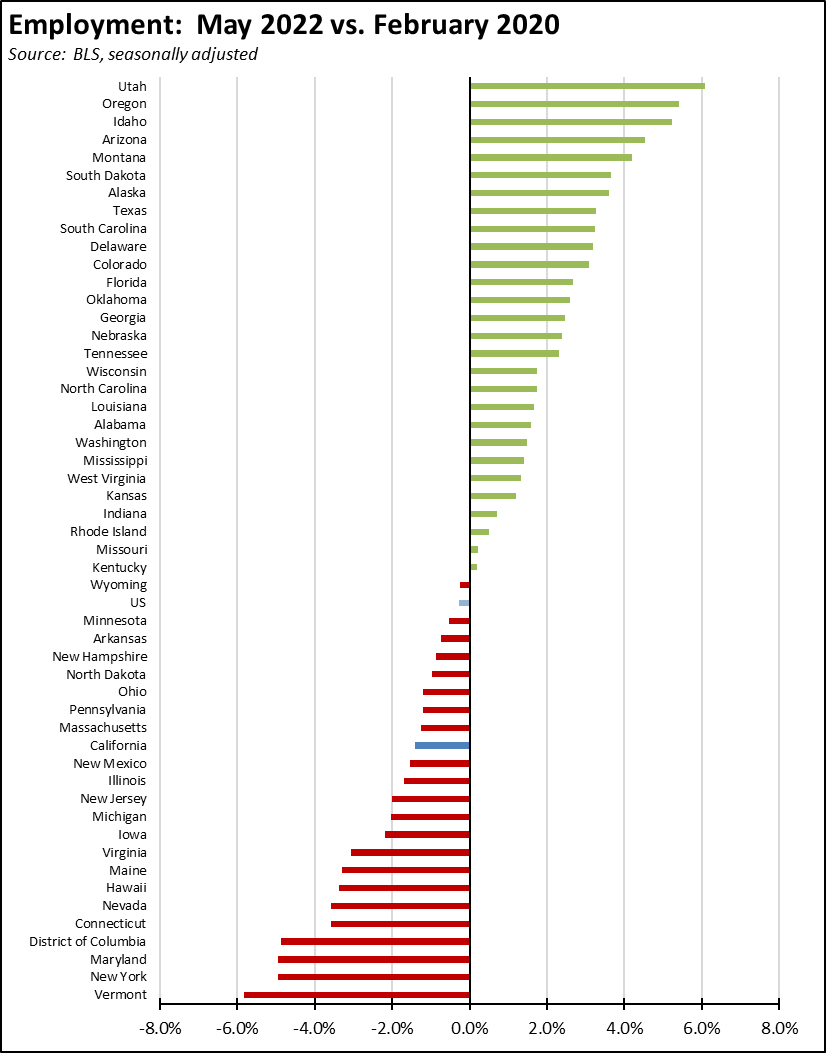 The unemployment insurance claims data also reflects this continuing lag in getting people back to work. Overall, since March, weekly initial claims have trended above the pre-pandemic average in 2019, while the US total has averaged 9% below. For the past 4 weeks ending with the week of June 11, California initial claims again were 22% of the national total, while insured unemployment (a proxy for continuing claims) in the 4 weeks through the week of May 7 was 25% of the total. 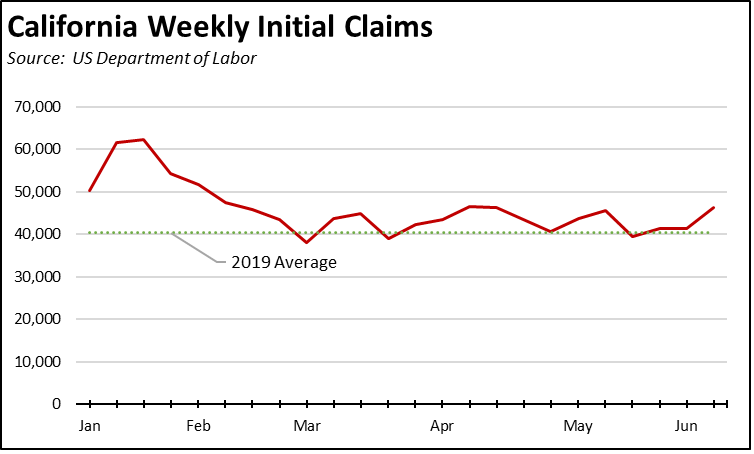 While an increasing number of states have recovered both jobs and employment lost during the pandemic, California lags behind, and it remains in this position as the national concerns turn to potential risks of renewed recession. This week, Wells Fargo changed its base case forecast to a mild recession starting in mid-2023. The Atlanta Federal Reserve Bank in their latest GDPNow results—which are adjusted as national economic data is released—currently expects 0% growth for real GDP in the second quarter. 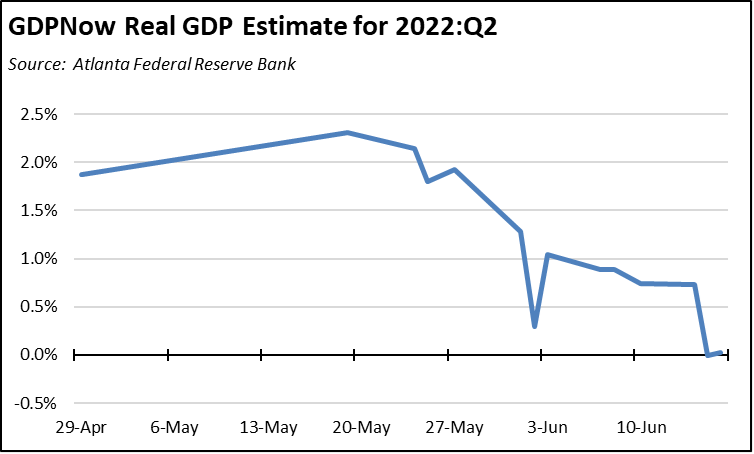 Due to its lagging recovery, California is less prepared for a new round of recession than most other states. More critically, the benefits structure the state consequently relies on to a far greater extent is in even worse condition.

In the latest results, Colorado became the latest state to use its federal pandemic assistance funds—as these funds were intended—to pay off the federal unemployment insurance fund debt accrued during the pandemic period. Combined with other reforms to reduce the economic costs to employers that would otherwise hinder job expansion, Colorado now expects to fully restore its fund by November.

This latest action now leaves the unemployment insurance funds in only two states—California and New York—in potentially untenable positions, with Massachusetts a potential third due to its failure to coalesce on reforms through an independent commission. Not only are these funds wholly unprepared for renewed demands that would come from another economic downturn. California’s in particular—now owing 59% of the total outstanding debt to the national fund—risks reaching a point where a new recession sinks it to a point of long-term insolvency.

California’s reported unemployment rate (seasonally adjusted) in May improved 0.3 point to 4.3% as the labor force again saw some improvement. California tied with Michigan for the 9th highest unemployment rate.

The reported national numbers show US unemployment rate (seasonally adjusted) again was unchanged at 3.6%. Employment rose 321,000, while unemployment again was essentially unchanged by rising only 9,000. The labor force was up 330,000.

The number of counties with an unemployment rate of 10% or more dipped to 1. The unadjusted rates ranged from 1.7% in San Mateo to 11.4% in Imperial.