The Labor Force data for November 2016 (seasonally adjusted; California preliminary) is shown below, along with the change from the prior month:

The related not seasonally adjusted numbers (California preliminary), with the change from November 2015:

California Employment Development Department’s (EDD) latest release shows on a seasonally adjusted basis, total employment grew by 47,000 from October, while the number of unemployed declined by 31,800. Most of the movement in the unemployment rate came from the shift from unemployed to employed, as the labor force only grew by 15,300.

Total US employment saw a seasonally adjusted increase of 160,000 from October, while the number of unemployed dropped by 387,000. The national unemployment rate dropped 0.3 points to 4.6%.

California’s participation rate (seasonally adjusted) remained constant at 62.8% in November, while the US rate continued to ease marginally by 0.1 point to 62.7%. The California participation rate has improved over the past five months, but has yet to rebound to levels that would constitute recovery. The overall rate still remains near the previous lows from 1976, and well below the average pre-recession level of 65.6% in 2007.

EDD reported that between October and November 2016, seasonally adjusted nonfarm wage and salary jobs grew 13,600 in November. October’s gains were revised upwards slightly to 34,400 from the previously reported gain of 31,200.

Looking at the not seasonally adjusted numbers, hiring saw increases in all but two industries. The change in total payroll jobs from November 2015 saw the largest increases in Government (73,100), Health Care & Social Assistance (58,400), and Professional, Scientific & Technical Services (47,800). Declines were in Manufacturing (-7,900) and Mining & Logging (-1,700).

Unemployment rates (all data is not seasonally adjusted) continue to vary widely across the state, ranging from 3.6% in the Bay Area to 2-1/2 times as large at 9.0% in the Central Valley.

Containing just under 20% of the state’s population, the Bay Area was responsible for 42.2% of the net growth in employment since the pre-recession peak in 2007. Los Angeles Region, falling to third place behind Inland Empire, has only 16.4% of net employment gains and just under 30% of the total population. 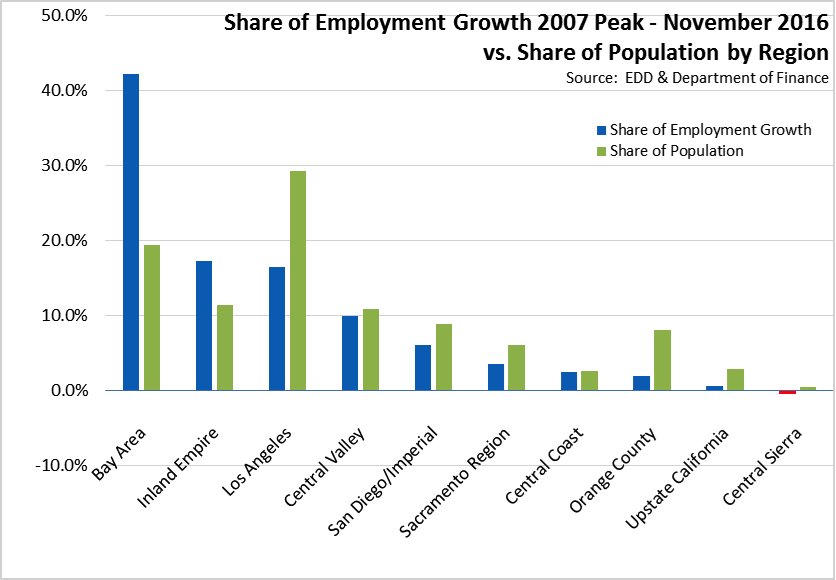 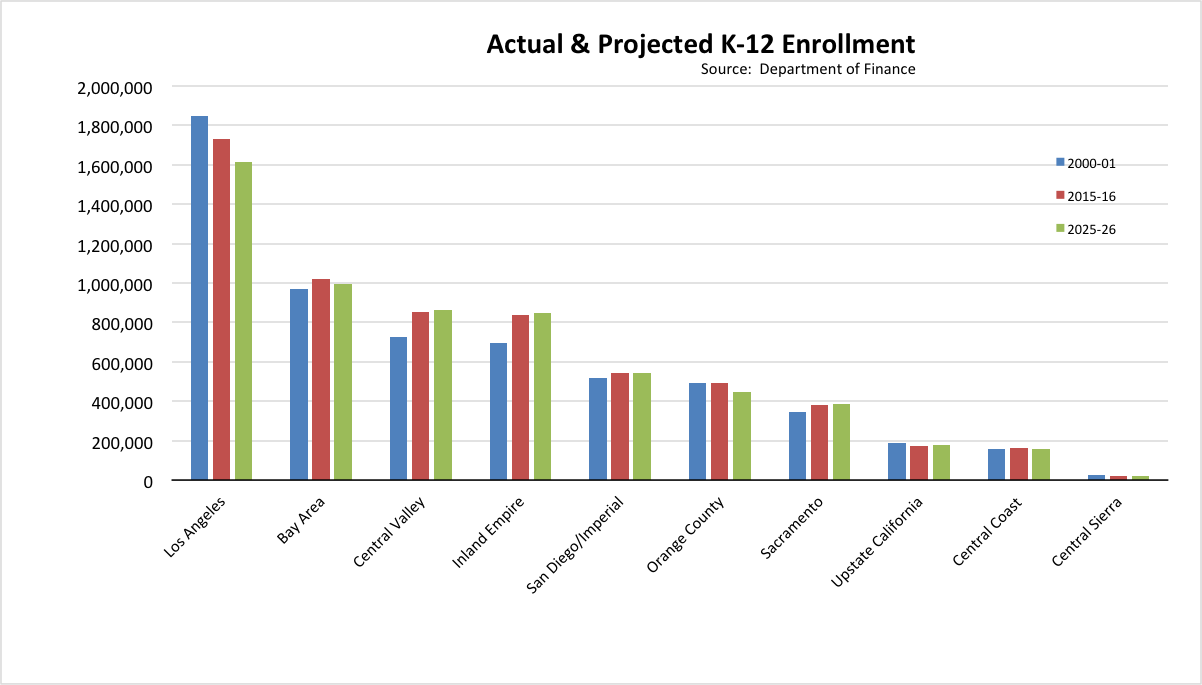 The Economic Indicator poverty rate data has been updated from the latest Census data release. As with the state, the poverty rates using the official federal poverty income levels have improved for most subregions. These rates, however, do not reflect the differing cost of living levels especially for housing and energy, nor do they include additions to household incomes from most government income assistance programs from both federal and state sources.

By region, the 2015 poverty rates vary widely from 10.1% in Bay Area to more than twice as high at 22.5% in Central Valley. And while the poverty rates in general continue to improve, all regions of the state remain above the pre-recession levels in 2007.

By Congressional and Legislative District, the estimated 2015 poverty rates show even wider variations.

Additional data for all geographic areas are in the Economic Indicators.

Commuting Data Update: Californians Still Rely on Single-Occupant Vehicles to Get to Work

In March, the Center released an analysis of Census Bureau commuting data, assessing the different transportation modes Californians use for commuting to their work. The data from 1980 to 2014 showed that even with the well-documented and rapidly rising costs of the state’s traffic congestion and costs associated with the deteriorating condition of the state’s roads, California workers continue to rely on single occupant vehicles for the primary mode of commuting.  The data show that the number of workers combined using public transit, carpools, and other modes such as bicycles and walking had increased only 0.42 million between 1980 and 2014 to a total of 3.6 million. In this same period, the number of California workers relying on single-occupant vehicles on the state’s increasingly crowded and deteriorating roads grew by 5.5 million to a total of 12.7 million. The only other mode showing significant increases was working at home, growing at the second highest rate of 0.7 million to a total of 0.9 million. The analysis also indicated that further substantial increases in working at home at this level were unlikely given the increasing complexity and restrictions under state employment law.

Recent updates released by the Census Bureau show that the trends identified in this analysis continued into 2015. For the state as a whole, nearly all of the increase in number of workers chose to commute in single occupant vehicles, while as expected, the growth in working at home began to slow.

Rates vary considerably by Congressional and Legislative District. Selected data for the highest and lowest districts (by percentage of workers using single occupant vehicles) are shown below:

Additional data for all geographic areas are in the Economic Indicators.