The October numbers showed mixed results, with the nonfarm job numbers posting a rebound strong enough to take the state just over its pre-Covid peak. Employment on the other hand posted a growing contraction for the third month in a row. The national numbers showed a similar result, with nonfarm jobs up and employment showing its first drop in 4 months, taking the national total just back below its pre-Covid level. Compared to the February 2020 pre-pandemic peaks, California was 0.2% above that recovery mark for nonfarm wage and salary jobs, and backslid to 1.2% short for employment. Jobs, however, have substantial ground to recover in order to achieve recovery defined as return to trend. 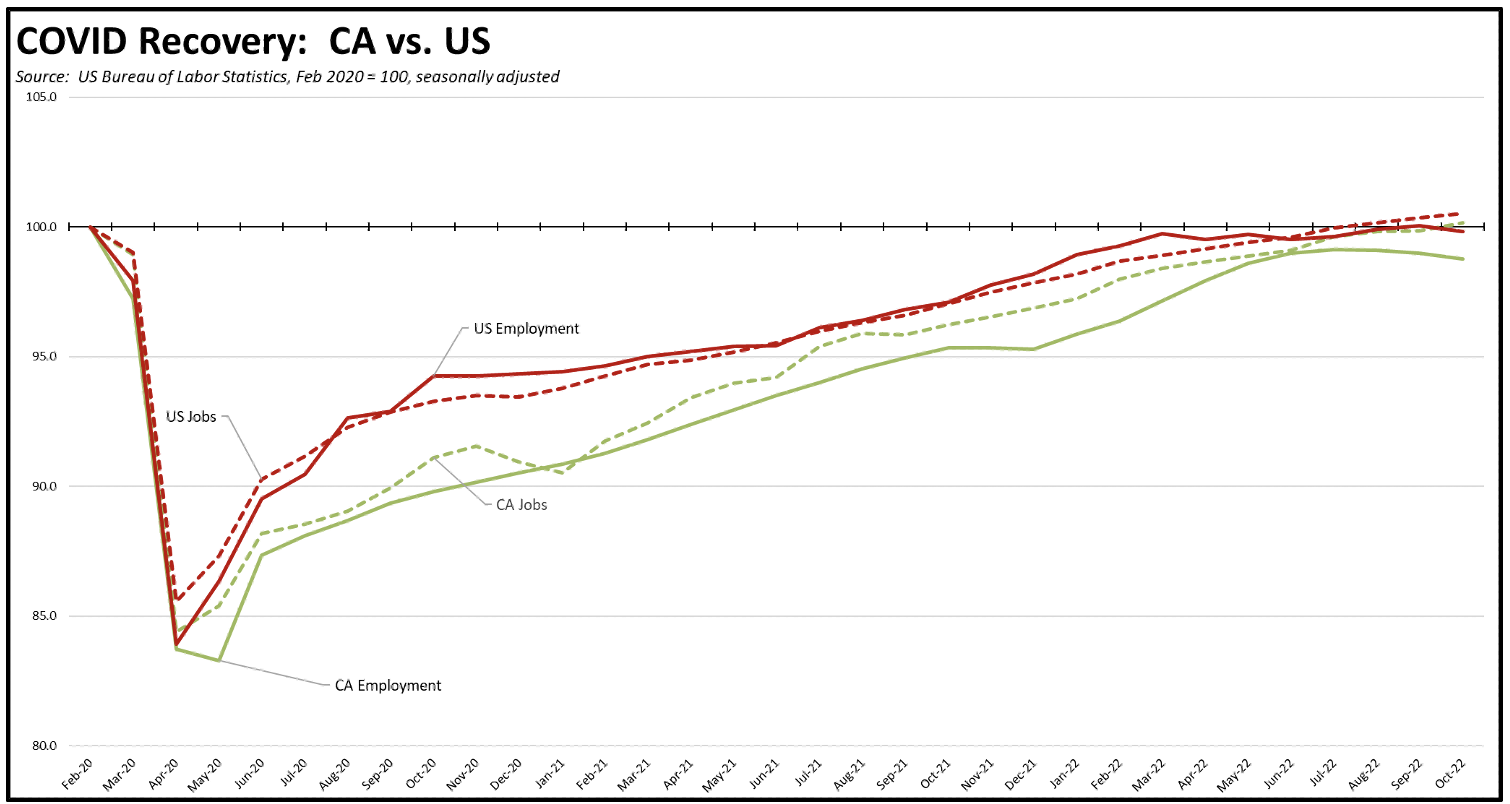 California nonfarm gains came in stronger at 56,700, the highest among the states followed by Texas (49,500) and Florida (36,400). Over the prior 12 months, California (695,600) was just barely ahead of Texas (694,200). California’s gains, however, primarily constitute jobs recovery from the series of state-ordered shutdowns, showing only growth of 30,800 above the pre-Covid peak. Texas has been growing beyond its pre-COVID peak since last November.

In the employment numbers, California remained at 35th highest among the states when measured by a return to the pre-pandemic employment peak, while 26 states had more people working than before the pandemic. The state’s unemployment rate dropped to 4.0% as the labor force remained stagnant, the 13th highest rate among the states and DC. Overall, the number of states including California having unemployment rates at or below the February 2020 level dropped from 36 to 32. 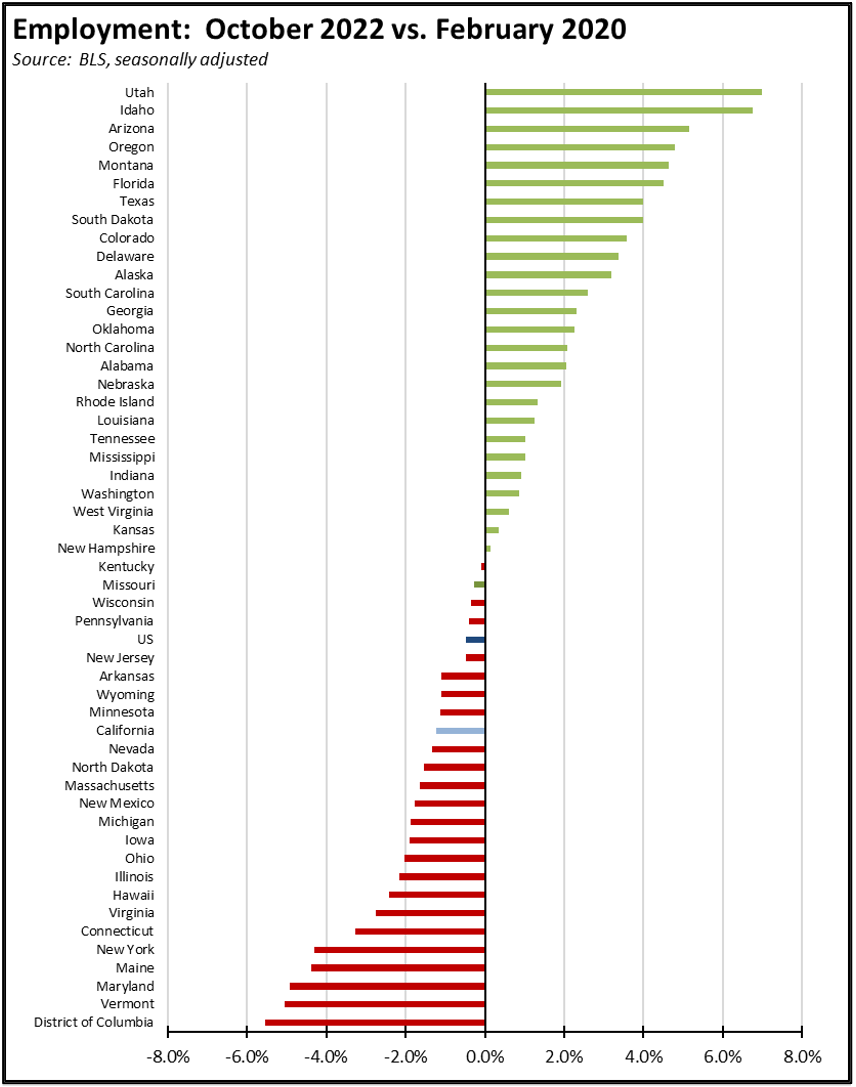 The October numbers come from surveys conducted prior to the recent upsurge in reported tech industry layoffs. So far in 2022, California-based tech companies have announced layoffs of at least 82,600, although not all of the collected press reports contain the number of jobs affected. Of this total, 28,700 were announced since October.

As frequently discussed, layoffs in the tech industry while significant to the overall state economy, are even more critical to the state budget. In the latest data for tax year 2019, the Bay Area provided 40.7% of the total personal income tax revenues that make up about two-thirds of the state general fund. The just-released general fund cash flow report for October shows fiscal year-to-date revenues running $2.3 billion ahead of projections. However, personal income withholding, and estimated payments are down a combined $5.6 billion. The $2.3 billion to the good is due to a positive contribution of $7.2 billion as refunds coming largely from the final tax returns filed in October were substantially lower than expected, indicating that this monthly uptick is due to economic performance last year and does not come from current levels of economic activity. Overall, the recently released Fiscal Outlook by the LAO warns that the state may be facing a budget shortfall of $25 billion in 2023-24 due to lower bonuses and pay in the tech industry, far fewer IPOs, and continued weakness in the stock market.

The number of initial claims (4-week moving average) continued their rise in California along with the rest of the US, although the California numbers remained near the pre-pandemic 2019 average and the US total remained well below. For the past 4 weeks ending with the week of November 12, California initial claims again were 21% of the national total, and insured unemployment (a proxy for continuing claims) in the 4 weeks through the week of November 5 remained 24% of the total. 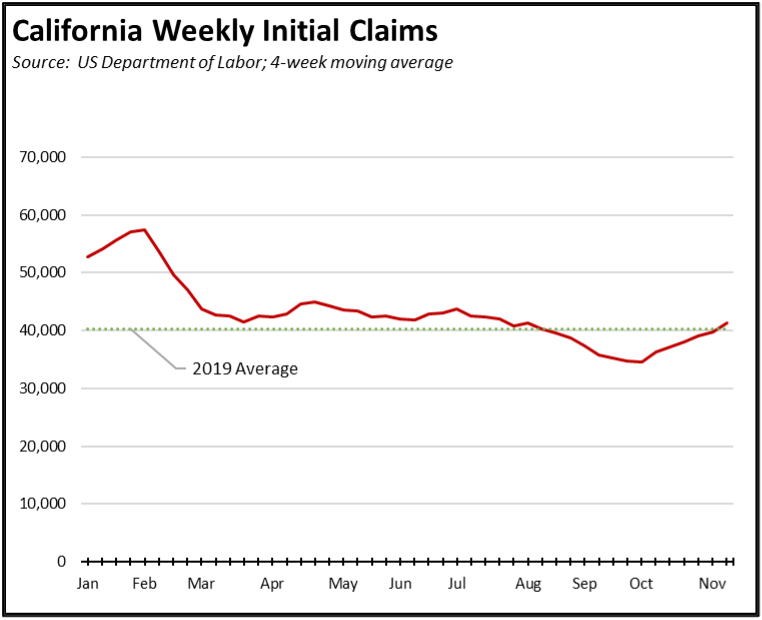 Even with the prospects of another economic downturn rising, California’s primary fund to assist unemployed workers remains fully unprepared. Colorado became the latest state to pay off its debt, and Illinois previously announced it will pay off its debt by the end of the year. The result of these actions will leave California and, in a distant second, New York as the primary states still relying on federal borrowing to sustain their unemployment funds both now and during what increasingly appears to be a looming recession in the upcoming year. In the current numbers, California is responsible for 66% of the total current federal debt. 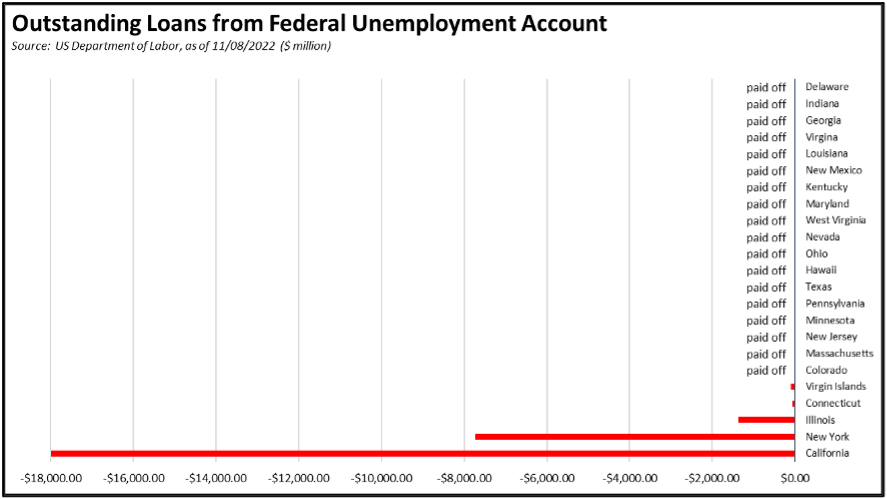 The October numbers show employment dropping for the fourth month in a row, posting a loss of 40,500. Unemployment dropped by 35,400. The labor force was essentially unchanged with a dip of 5,100, and the participation rate level at 62.3%.

The reported national numbers show US unemployment rate (seasonally adjusted) rising 0.2 point to 3.7%. Employment was down 328,000, unemployment up by 306,000, and the labor force essentially unchanged with a dip of 22,000.

Nonfarm wage and salary jobs were up 56,700, breaking the pre-pandemic peak in February 2020 for the first time.

Nonfarm jobs nationally were up 261,000, posting the forth month in a row above of the pre-pandemic peak in February 2020.

California unfilled job openings at the end of September were little changed at 1.154 million, representing 1.5 job openings for every unemployed person that month. Nationally, job openings were up, rising 4.3% to 10.7 million.

The number of counties with an unemployment rate at 10% or more remained at 1. The unadjusted rates ranged from 2.0% in San Mateo to 16.2% in Imperial.