EDD reported total employment (seasonally adjusted; September preliminary) was up 38,000 from the revised August numbers, while the number of unemployed dropped 17,400.  Unemployment rate dipped to a record low of 4.0%.  The unadjusted rate was down 0.2 point from the year earlier to 3.5%, matching May’s rate level as the lowest in the current series stretching back to 1976.  The improvement in the unemployment rate comes from the labor force essentially remaining static, but with a shift to the employed.

California improved slightly to the 15th highest unemployment rate among the states.

In another sign of the economy’s slowing, the total number of persons employed (seasonally adjusted) over the 12 months ending in September shrank by 39,500.  California improved slightly to the 50th highest rank with Texas leading with an additional 209,000 persons employed over this period, and Florida in second place with a gain of 161,800.

Based on percentage growth, California had a 0.2% contraction in employment, below the average for the rest of the US with a gain of 1.6%.

In addition to labor force participation rates, another way to measure labor force engagement is through the employment-to-population (civilian population, age 16 and over) ratio.  Among other issues, this statistic has been used to measure the gain of women and minority workers over the years, but in the current circumstances can be used to indicate the ability to maintain jobs growth based on the pool of active workers.

As shown in the chart below, California achieved a higher level of growth prior to the 1990s recession in no small part to a much higher share of its working age population actually engaged in work.  This relationship reversed during that recovery, but the two rates closed again at the beginning of the 2000s.  The rates again diverged at that point, and the gap deepened during the most recent recession.  And this gap continues even though the state has a relatively younger population—in the latest 2018 American Community Survey data, California was the 6th youngest state when measured by median age, 36.7 years compared to the other states that range from 31.0 to 45.1 years.

Similar to the labor force data, the employment ratio has dropped over the past seven months, indicating that while the economy continues to produce jobs, the population is not providing new workers to take them.

Factors leading to this situation may include the major increase in social assistance spending begun at the start of the 2000s, continuing separation in particular of lower education men from the availability of blue collar middle class wage jobs, and the continuing effect of minimum wage increases on the sharp drop in youth employment along with the early acquisition of workplace skills associated with much higher lifetime earnings potential. 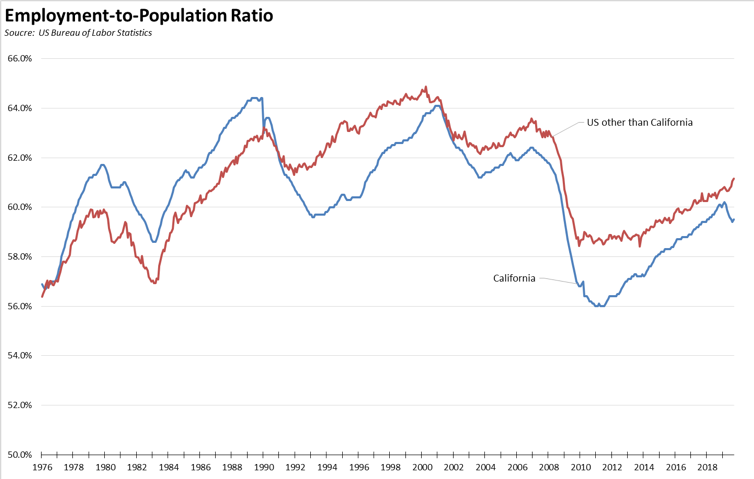 Adjusting for population size, California came in at 13th among the states, with a 12-month jobs growth rate of 1.9% compared to the rest of the US at 1.4%.

Jobs growth within the traditional middle class wage—especially blue collar industries such as Manufacturing, Mining & Logging, and Utilities—continues to lag.  After stronger gains during the recovery, both Wholesale and Retail Trade have continued to show weakness, reflecting competitive pressures from nontraditional channels at the same time these industries have been weakened by state policies producing higher operating costs.  Finance & Insurance also remains in the negative column as companies have moved back office and other operations out of the state. 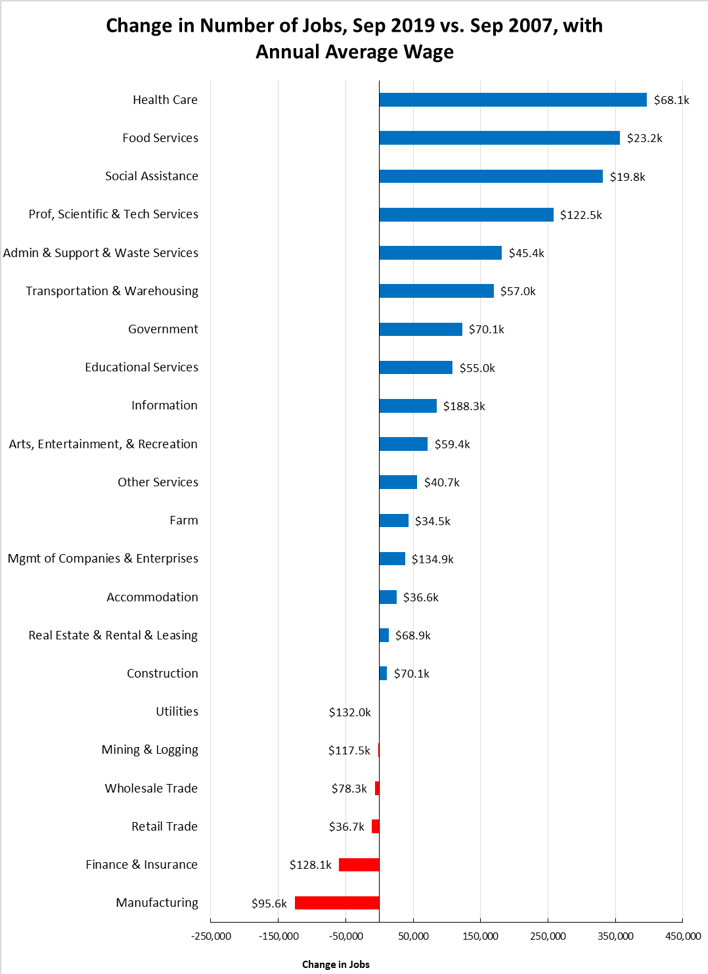 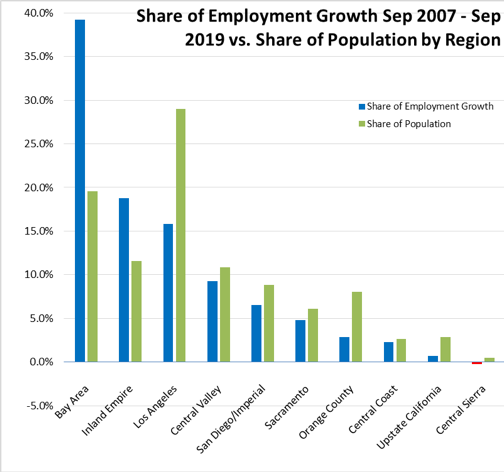 Of the 20 Metropolitan Statistical Areas (MSAs) with the worst unemployment rates in August 2018, 8 are in California, including El Centro MSA (Imperial County) which continues with Great Depression-era levels of unemployment that are 13 times worse than in San Mateo, the county with the lowest unemployment rate.

One of the more frequently watched indicators on the national level is the Job Openings and Labor Turnover Survey (JOLTS) data released monthly by the US Bureau of Labor Statistics.  This data is used to show some of the underlying dynamics within the country’s job market. This data is particularly useful in assessing the degree to which the economy is entering a labor shortage or surplus period including both by totals and by required skill levels, along with assessing the relative importance of why workers are leaving jobs by comparing separations for both layoffs and voluntary quits.

This data previously was only available at the national and regional levels.  Recently released experimental data now makes it available for the states.  The state data is reported as 3-month moving averages, and will be updated quarterly.  The national data is available by industry.  The state data will be limited to total nonfarm results.

Transforming the US data into 3-month moving averages as well, the number of unemployed per job opening show considerable labor tightening at both the California and US levels.  Throughout much of 2018 and the second quarter of 2019, the US levels were at their historic lows of only 0.8 unemployed worker for every vacant job, while California with its relatively higher number of unemployed and stalling labor force numbers reached 1.0 unemployed workers per job opening in almost all of the second half of 2018 and in the most recent data for June 2019. 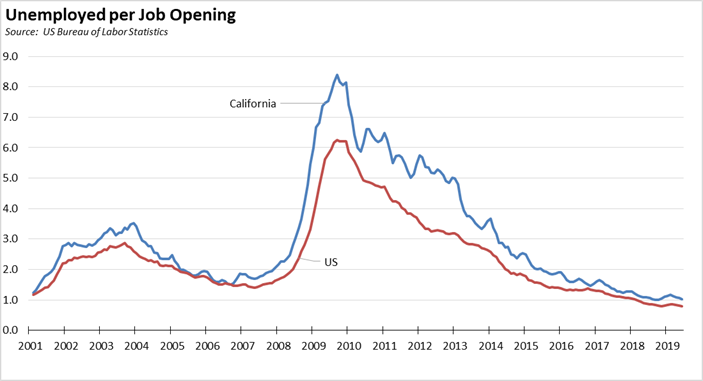 The Job Openings Rates remain high and generally on an uptrend, although the US rate moderated somewhat in the second quarter of this year.  While the US and California rates tracked closely both prior to and during the Great Recession, there has been more variability during the recovery period, with the US as a whole pulling ahead since 2018 as the California economy began to slow particularly as the result of a leveling off in its labor force numbers.  While California continues to increase its job vacancies, the labor force is not necessarily providing the workers to fill them. 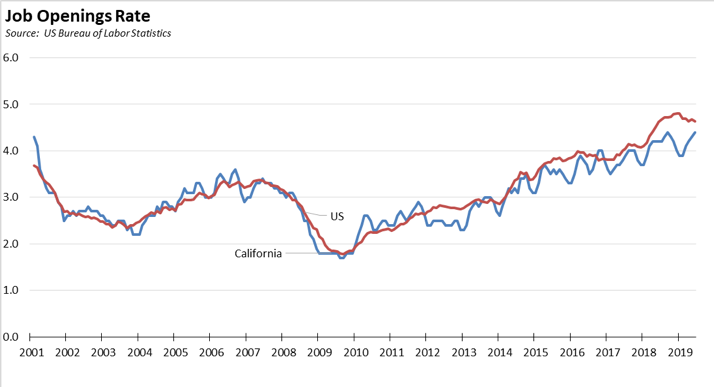 A comparison of the Hiring and Separation Rates shows considerable more labor force churn on the national level, with the California rates again reflecting the leveling out in the labor force numbers. 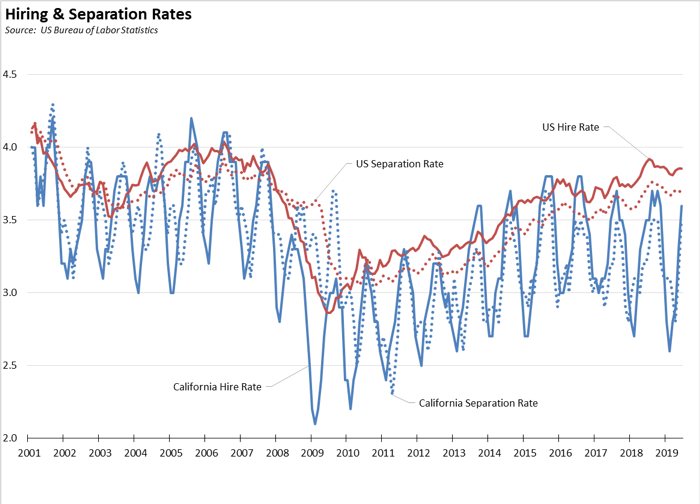 The Separation Rates show comparable trends, but with workers in California (Quit Rate) showing less certainty in being able to find better jobs than those at the national level.  At the same time, California employers have also shown a lower rate of involuntary separations, keeping the workers they have although the most recent data for June shows a jump up to the national level. 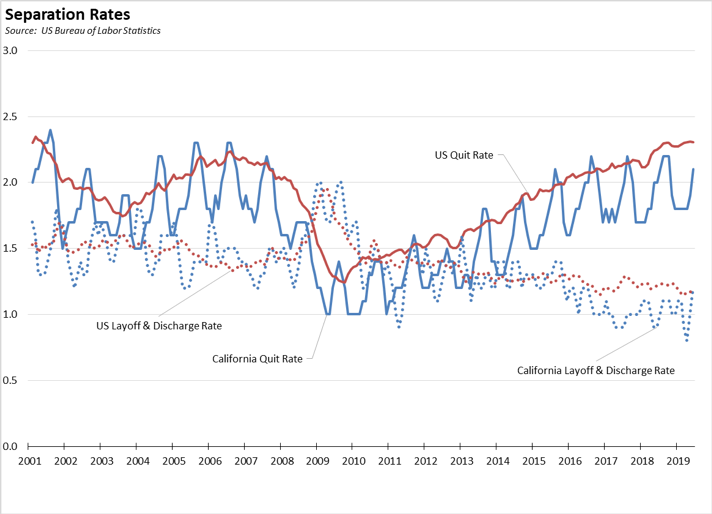 Job Openings.  Covers all job vacancies remaining at the end of each month, excluding those that will be filled internally, through layoff recalls, or means such as temp agencies or contractors.  Job openings rate is calculated by dividing the number of job openings by the sum of Nonfarm employment and job openings for each month.

Job Separations.  Separations covers the number of job terminations at any time within a month regardless of work status, again with the exclusions as under Job Openings but also excluding any strikes.  The data is further broken down into voluntary quits, involuntary layoffs and discharges, and other separations including for retirement, transfer to other locations, deaths, and disability.   All separation rates are calculated by dividing the number of separations by Nonfarm employment for each month.