Below are highlights from the recently released trade data from the US Census Bureau and the US Bureau of Economic Analysis.

In nominal terms, the February 2022 results continue to show California exports and trade flows through the state’s ports above the pre-pandemic levels in February 2020. Due to rapidly rising inflation, exports in real dollars were down just over 5%, while imports continued to surge as companies sought to counter renewed closures in China and concerns over a possible West Coast ports strike.

Port congestion remains high but continues to ease from the peak backup of 109 container vessels recorded for the Ports of Los Angeles and Long Beach on January 9. On October 20, 2021, when the state issued its measures to tackle the ongoing supply chain issues, the backup was at 71 container ships and 108 total ships at anchor or loitering off the ports. In the latest numbers for April 1, the total container ship backup was 41.

Overall, supply chain blockages remain elevated but somewhat improved from their prior peaks. In an update to their Global Supply Chain Index, the New York Fed Liberty Street Economics indicates that supply chain conditions within the US are only somewhat better than the overall global average. The Index is based on a composite of trade and trade congestion statistics, with the Index expressed as the number of standard deviations from the long-term average level.

Conditions within China, however, continue to worsen in part due to renewed shutdowns. The Euro Area instead shows overall better supply chain health, but with renewed deterioration likely to worsen as the war in Ukraine lengthens. 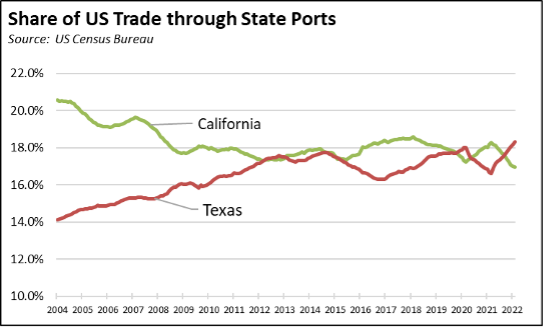 Even with this slipping rank, California remains the nation’s gateway to Pacific trade, a competitive advantage that forms the base for one of California’s largest centers of middle-class, blue-collar jobs that has shown substantial growth even during the pandemic period. As shown in the chart, overall jobs in this industry dipped at the beginning of the pandemic primarily in the passenger-related components. Job levels, however, recovered quickly and have continued to surge as these employers have sought to overcome the supply chain blockages affecting the rest of the economy and household prices. Transportation & Warehousing is one of only five industries now exceeding the prior February 2020 pre-pandemic levels and stands out even among these five by growing—not just recovering but growing—16.8% beyond that point. As primarily a blue-collar industry, average annual wages were $69,160 in the latest 3rd quarter data for 2021. Yet, in spite of the importance of this job center to equitable job growth in the state, the regulatory agencies continued to impose new restrictions and fees on these facilities even during the recovery period. 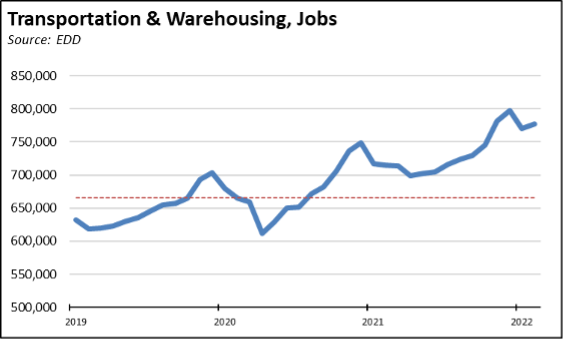 Total California goods exports were up $1.6 billion from February 2021 (up 12%). California remained in 2nd place with 9.85% of all US goods exports (12-month moving total), behind Texas at 21.85%. Note that as gateway states, both California and Texas origin exports—as well as imports—include both goods produced within each state along with goods assembled from other states for subsequent trade. 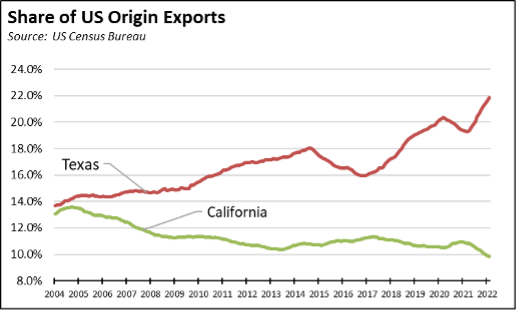 California’s balance of goods trade activity through state businesses broadened to -$25.0 billion, compared to a level of -$19.8 billion in February 2021. California trade accounted for 30% of the US trade deficit in goods in February 2022.

Top 20 exports by value are shown below, along with the change from February 2021.