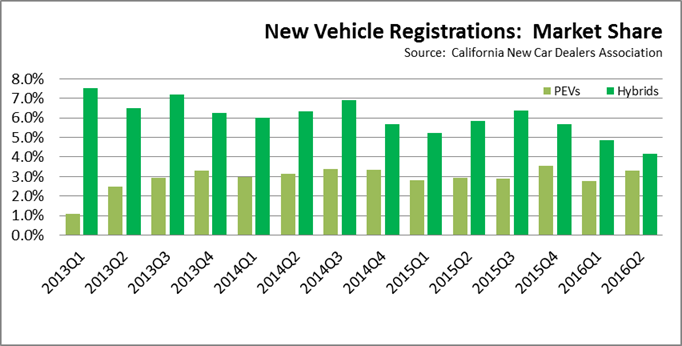 Accounting for normal fleet turnover rates and reductions from persons moving out of California, PEV sales would need to be 2.7 times as large in order to meet the 2025 goal.

The chart below is based on the Energy Commission’s baseline estimate of 146,000 PEVs between March 2011 and July 2015, and updated with the New Car Dealers’ quarterly sales data.  This approach provides an overestimate of the number of PEVs actually registered in the state as it does not account for vehicles withdrawn from the fleet due to accidents, returns, trade-ins, owners moving out of the state, and other actions causing vehicles to be removed from the in-state fleet. This factor will be adjusted as the Commission updates its estimates in periodic reports.

Rather than increasing the state’s competitiveness for an expanded manufacturing base, recent actions have instead increased the difficulty of siting and operating these facilities in California, including increasing the complexity and therefore litigation risks associated with the state’s employment laws, regulatory actions that contribute to industrial electricity rates that are 67% higher than the national average, the continuing expansion of the state’s already extensive California-only regulations, and a permitting and siting decision process that can take years to complete.

California’s ability to compete for these manufacturing facilities is illustrated by Tesla’s Gigafactory, which began partial operations only 13 months after selection of its site in Nevada was announced.  In California, the CEQA and permitting process alone generally take far more time than this to complete.