PEV Sales Drop in 1st Half

As part of the AB 32 climate change program, Executive Order B-48-18 administratively created a goal of 5 million zero-emission vehicles (ZEVs) on California roads by 2030. This action expands on the prior Executive Order B-16-2012, which set a goal of 1.5 million by 2025.  While these goals were set administratively, they are embodied in the state’s climate change strategies, and both public and utility ratepayer funds are being used in an attempt to reach this goal, including purchase subsidies, refueling infrastructure, regulatory credit sales that raise the price of traditional fuel vehicles, a continuing net subsidy from gasoline consumers for roads and road repairs, and other measures.

Rather than only true ZEVs, the numbers in the Executive Order and previous interpretations by the agencies indicate the goal is to be achieved by both BEVs that run only on electricity and combustion PHEVs that run on both electricity and gasoline. Consequently, only a portion of the vehicles being counted to meet the zero-emission goal—roughly half based on current sales volumes—will in fact produce zero emissions when driven. Additionally, FCEVs (fuel cell electric vehicles) also would count towards the ZEV total, but CNCDA data show total market share for these vehicles to date at around 0.1%.

Using this more flexible interpretation that includes both true ZEVs and combustion PHEVs, total PEV sales since 2009 account for 15.3% of the 2030 goal. True ZEV sales, however, account for only 8.9%. 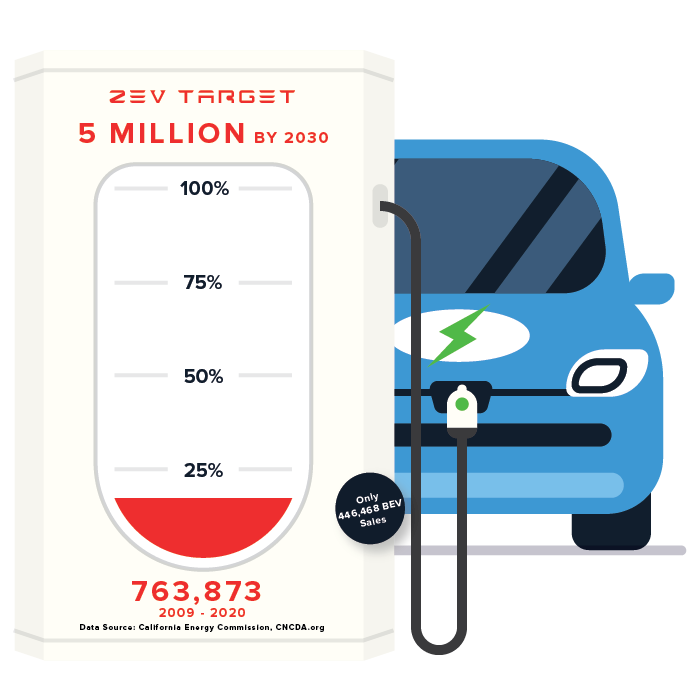 In addition to the distortion that comes from including combustion vehicles in the ZEV total, the Executive Orders also refer to ZEVs on California roads while the agency accountings rely on sales as the measure of progress. Using prior Energy Commission reviews to account for ZEVs no longer on the roads as a result of accidents, moves out of state, and other factors that over time remove vehicles from the active fleet, the actual progress rate consistent with the Executive Order language of “vehicles on California’s roads” would be 14.1%, while progress counting only true ZEVs would be 8.2%. As discussed in the 2018:Q1 report, carpool lane sticker data, however, suggests a much higher turnover of PEVs “off California’s roads” than in prior estimates. This factor would put the progress to date even lower.

Executive Order B-16-2012 contains a number of provisions calling for actions to expand the ZEV and ZEV component manufacturing base in California. As detailed in past reports, by failing to take any meaningful actions to implement these provisions, California instead has seen the modern-day electric vehicle industry it fundamentally began in 1990, go to other states and increasingly to a growing concentration of the industry in China including both vehicles and the battery materials and components required to power them.

California has a significant ZEV production presence with Tesla, but that company located here primarily because of the availability of a vacant vehicle production facility that was fully permitted and ready to reopen. Even Tesla when considering production expansion for both vehicles and battery pack assembly chose to go elsewhere, including now Nevada, Texas, and China. Recent operational challenges within California have also led Tesla to consider moving the Fremont production as well.

As with many other agency claims to offsetting benefits possible from “green jobs,” the manufacturing provisions in the executive orders appear to date to have been an attempt to justify otherwise-costly new regulations rather than a sustained attempt to expand blue collar jobs in the state. While California has promises for these “green jobs,” other states and China are seeing them being created, earning wages, and generating public revenues for schools and other public services.