The latest new vehicle sales data from California New Car Dealers Association  shows total 2019 sales at 1.89 million units for the year, slipping below the prior four years but still well above historical levels.  While slowing, this indicator reflects the level of overall consumer confidence and continuing strength of the recovery.  New vehicle sales are also a critical indicator of state and local revenues, with Motor Vehicle and Parts Dealers (NAICS 441) producing 12% of total taxable sales in the most recent data for the third quarter in 2019.

Light Trucks at 62% of Sales

As part of the AB 32 climate change program, Executive Order B-48-18 administratively created a goal of 5 million zero-emission vehicles (ZEVs) on California roads by 2030.  This action expands on the prior Executive Order B-16-2012, which set a goal of 1.5 million by 2025.   While these goals were set administratively, they are embodied in the state’s climate change strategies, and both public and utility ratepayer funds are being used in an attempt to reach this goal, including purchase subsidies, refueling infrastructure, regulatory credit sales that raise the price of traditional fuel vehicles, a continuing net subsidy from gasoline consumers for roads and road repairs, and other measures.

Rather than only true ZEVs, the numbers in the Executive Order and previous interpretations by the agencies indicate the goal is to be achieved by both BEVs that run only on electricity and combustion PHEVs that run on both electricity and gasoline.  Consequently, only a portion of the vehicles being counted to meet the zero emission goal—roughly half based on current sales volumes—will in fact produce zero emissions when driven.  Additionally, FCEVs (fuel cell electric vehicles) also would count towards the ZEV total, but CNCDA data show total market share for these vehicles to date at around 0.1%.

Using this more flexible interpretation that includes both true ZEVs and combustion PHEVs, total PEV sales since 2009 account for 13.4% of the 2030 goal.  True ZEV sales, however, account for only 7.6%. 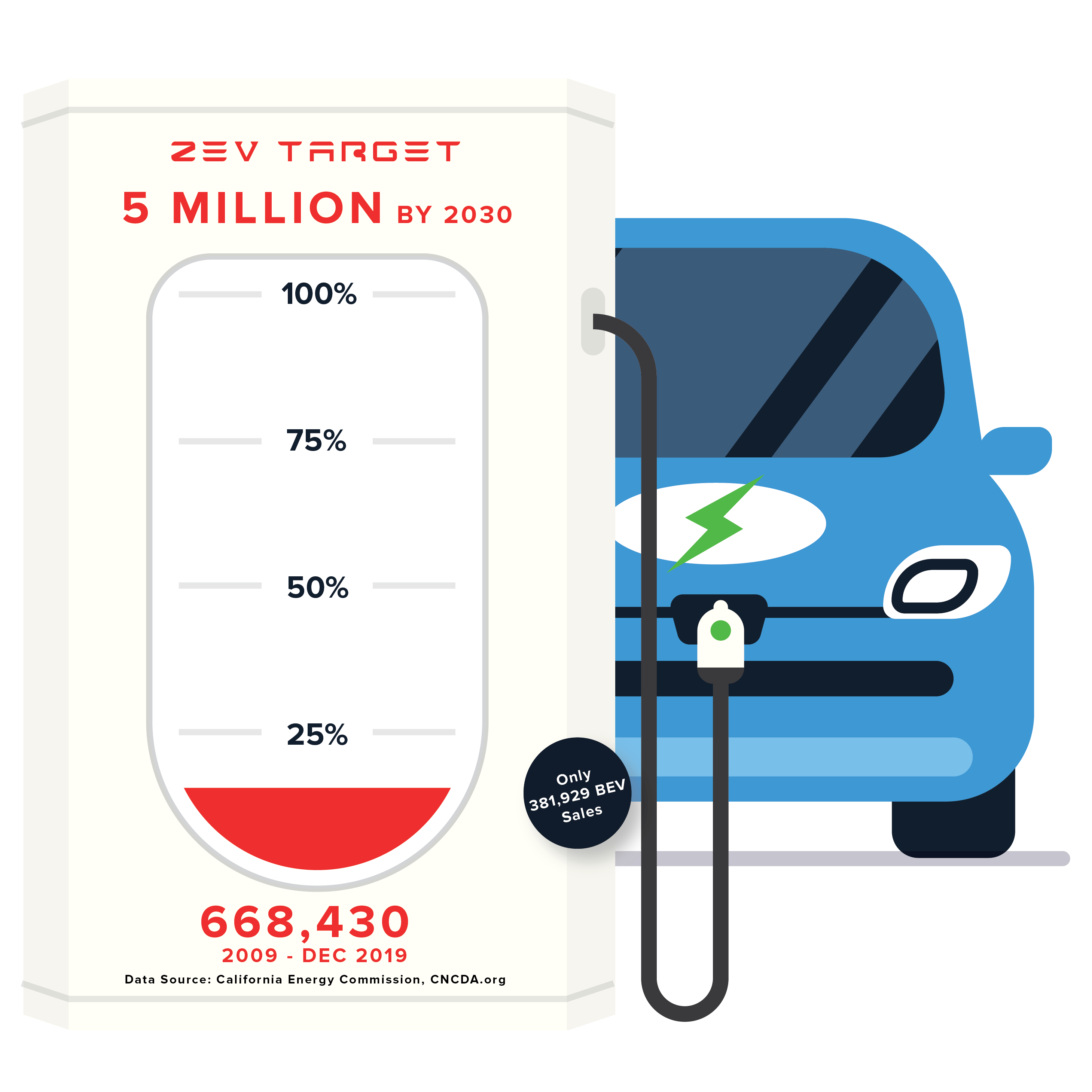 In addition to the distortion that comes from including combustion vehicles in the ZEV total, the Executive Orders also refer to ZEVs on California roads while the agency accountings rely on sales as the measure of progress.  Using prior Energy Commission reviews to account for ZEVs no longer on the roads as a result of accidents, moves out of state, and other factors that over time remove vehicles from the active fleet, the actual progress rate consistent with the Executive Order language of “vehicles on California’s roads” would be 12.3% rather than the 13.4% shown in the chart.  As discussed in the 2018:Q1 report, carpool lane sticker data, however, suggests a much higher turnover of PEVs “off California’s roads” than in prior estimates.

The specific steps to address these provisions in the most recent ZEV Action Plan, however, call primarily for data collection and conversations rather than specific policy changes that would have created real jobs.  California consequently has seen the modern-day electric vehicle industry—which the state in essence created under CARB’s LEV I regulations in 1990—go to other states if not increasingly concentrated offshore in China.

California does have a significant ZEV production presence from Tesla, but Tesla located here primarily because of the availability of a vacant vehicle production facility that was fully permitted and constructed.  California previously had several such facilities including in both the Bay Area and Southern California, but instead of being repurposed to create new manufacturing jobs, they were instead mined to produce air quality emission credits.  When it came time to expand with new facilities, Tesla instead chose Nevada, other states, and China where the regulatory processes and cost factors allow facilities to be constructed and staffed according to schedules reflecting the rapidly changing needs of this industry.  And as China continues to expand its near monopolistic control over the battery production needed to fuel these vehicles, this concentration is only slated to grow more intense in the years to come.  While California has promises for these “green jobs,” other states and China are seeing them being created, earning wages, and generating public revenues for schools and other public services.

The availability of a fully permitted and quick-to-operational facility in Fremont has made it possible for California to have at least one component of this industry.  As shown in the chart below, California employment in the related industries (NAICS 3362 Motor Vehicle Manufacturing, 3362 Motor Vehicle Body & Trailer Manufacturing, and 3363 Motor Vehicle Parts Manufacturing) in the most recent 2019:Q2 data was 42% above the level in 2010:Q1, below growth in the other states which came in 52% higher.  Rather than making California an electric vehicle manufacturing center, this relative performance reflects the fact that other states are doing as well or better in securing these jobs.  In terms of total jobs, California also lags behind with only 3.7% of total national employment in these three industries, down from 3.9% in 2010:Q1. 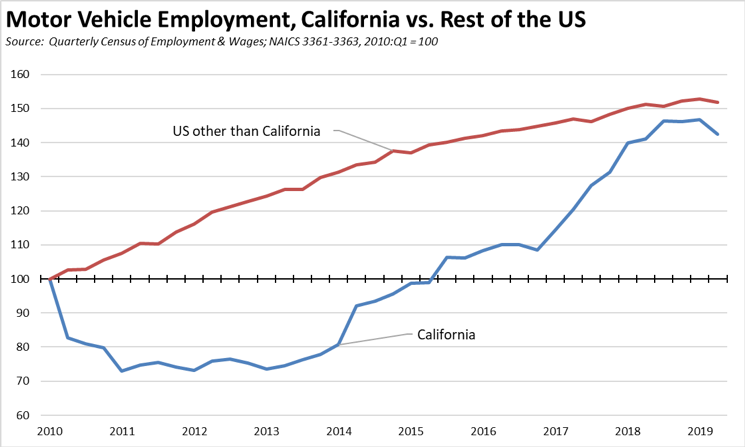 As recently reported by US Geological Survey, the dependence of the state’s electric vehicle policies on the politically unstable DRC continued.  In 2019, DRC produced 71% of the cobalt that has been essential for the production of electric vehicle batteries compared to 70% in the revised 2018 numbers and 61% in 2017.  Production of other battery critical materials including lithium and battery-grade nickel supplies is also highly concentrated within a few countries. 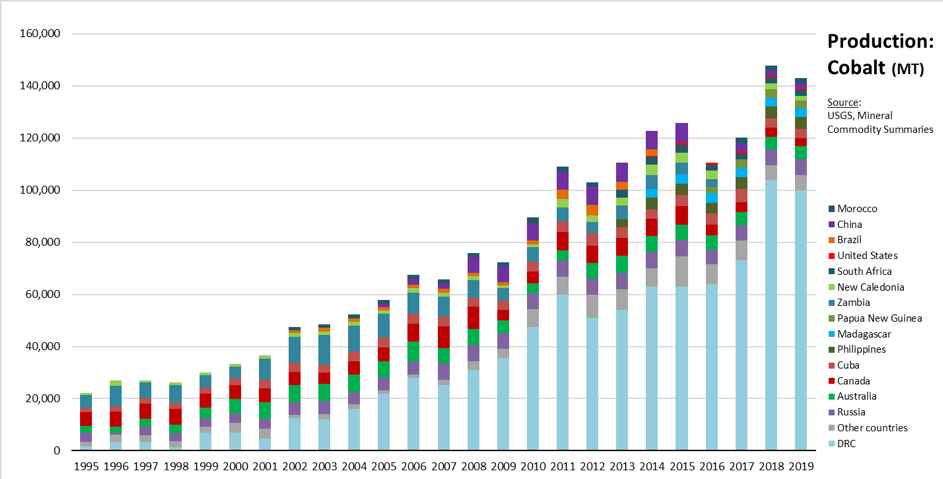 As detailed in the Center’s A Closer Look at California’s Cobalt Economy, DRC has been marked by ongoing civil and international wars, internal conflicts from militias and the nation’s own security forces, and continuing high levels of corruption and sporadic government control of many areas.  Internal strife in 2019 continued to force hundreds of thousands to flee their homes.  Instability of this type has affected that nation’s mining output in the past with immediate effects on world prices and supplies, as recently illustrated by Glencore’s recent decision to idle its Mutanda Mine, an action that reduced worldwide cobalt output so far by 5% in 2019 in a move to boost prices.  DRC in turn has moved to increase future production by removing 10,000 families from areas targeted for new mines.

DRC cobalt mining is also heavily dependent on artisanal mining, estimated to comprise 20% of that nation’s output or about 14% of the world’s supply.  Previous reports on artisanal mining in that country citied unsafe working conditions and an estimated 40,000 child laborers, slave labor, and worker and human rights abuses.  In December 2019, Washington, DC based International Rights Advocates filed a lawsuit against Apple, Alphabet, Dell, Microsoft, and Tesla on behalf of 14 families whose children were killed or maimed while mining cobalt.  Details of the allegations are contained in the filed complaint.