Below are the monthly updates from the most current December 2022 fuel price data (GasBuddy.com) and October 2022 electricity and natural gas price data (US Energy Information Administration). To view additional data and analysis related to the California economy visit our website at www.centerforjobs.org/ca.

The latest data shows average gasoline prices continuing to decline from the supply-driven price increases earlier this year.  December prices were down 24.6% from the near term high in October, and down 30.1% from the previous high in June. The most recent data from CSAA as of January 6 show prices stabilizing, with the California average price down a penny to $4.44 and the US price up 9 cents to $3.20.

California’s regulations and their effect of restricting the state’s access to alternative supplies combined with the state’s highest-in-the-nation fuel taxes and higher operating costs ensure Californians will continue to pay substantially more for fuels even with the current price easing. As the result of these California policies, gasoline prices in December were 43.3% higher than the average paid in other states. California prices were 63.6% higher than prices in the lowest cost state.

California’s high electricity rates have also pushed the average household electricity bill further above the rest of the US.  While California rates have long been somewhat higher than the US average, the state’s milder climate—at least in the higher income coastal regions—meant average electricity bills were substantially lower. The amount paid by households, however, continues to soar. First, average rates are not only higher, they are substantially higher at 82.6% above the average elsewhere in the nation. Second, state policies are deliberately pushing households and employers into a greater reliance on electricity as their primary source of energy. State policies currently are structured to force greater use of an energy source that state policies are now driving to even higher cost levels.

The resulting effect on household electricity bills is shown in the following chart. The average California electricity bill was near the bottom in the state rankings prior to the beginnings of the current climate change policies—as much as 6th lowest in portions of 2011 and 2014. The degree to which rates have since diverged from what is paid in other states have now taken California households to the 16th highest in the latest data from October. 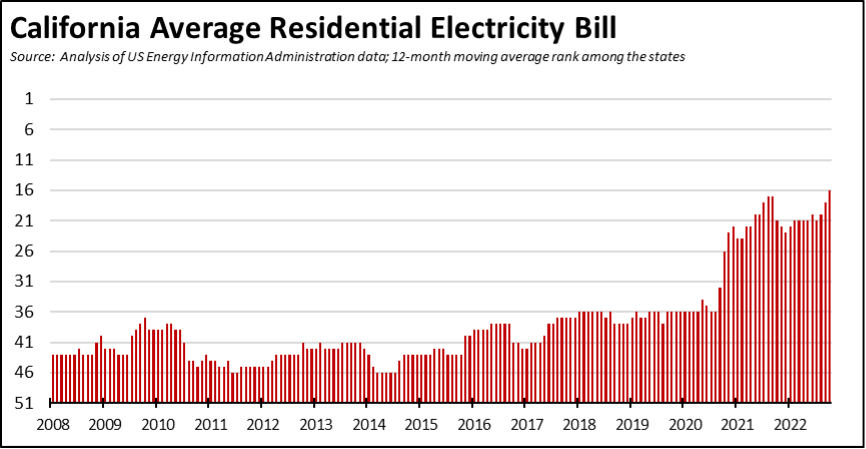 Inflation Remains at Highest Level Since 1982

California vs. Rest of US Fuel Price Gap at 43.3% Premium

$1.34
Price Per Gallon
Above US Average
(CA Average)

The December average price per gallon of regular gasoline in California eased 75 cents from November to $4.45. The California premium above the average for the US other than California ($3.10) eased to $1.34, a 43.3% difference.

In December, California again had the 2nd highest gasoline price among the states and DC, behind only Hawaii. Californians paid $1.73 a gallon more than consumers in Texas, the state with the lowest price.

$0.94
Price Per Gallon
Above US Average
(CA Average)

The December average price per gallon of diesel in California eased 49 cents from November to $5.66. The California premium above the average for the US other than California ($4.72) was essentially unchanged at 94.3 cents, a 20.0% difference.

In November, California again had the highest diesel price among the states and DC, behind Hawaii and Pennsylvania.

$1.67
Price Per Gallon
Above US Average
(Central Coast Region)

California average Residential Price for the 12 months ended October 2022 was 25.98 cents/kWh, 82.6% higher than the US average of 14.23 cents/kWh for all states other than California. California’s residential prices were again the highest among the contiguous states.

In 2010, California had the 9th lowest residential electricity bill in the nation.  In the latest data, California tied with Oklahoma for the 16th highest.

Residential bills, however, vary widely by region, with the estimated annual household usage in the recently released data for 2021 as much as 83% higher in the interior regions compared to the milder climate coastal areas, and substantially higher when comparing across counties.

Applying the 2021 estimated regional average electricity rates, annual electricity bills vary somewhat more widely, with annual costs up to just over twice as large in the interior compared to the coastal regions.

$10.6b
Premium Above
US Average Price

For the 12 months ended October 2022, California’s higher electricity prices translated into Residential ratepayers paying $10.6 billion more than the average ratepayers elsewhere in the US using the same amount of energy.

California average Commercial Price for the 12 months ended October 2022 was 21.19 cents/kWh, 83.8% higher than the US average of 11.53 cents/kWh for all states other than California. California’s commercial prices again were the highest among the contiguous states.

California average Industrial Price for the 12 months ended October 2022 was 16.90 cents/kWh, 115.0% higher than the US average of 7.86 cents/kWh for all states other than California. California’s industrial prices again were the 3rd highest among the contiguous states.

$15.4b
Premium Above
US Average Price

Average prices ($ per thousand cubic feet; 12-month moving average) for the 12 months ended October 2022 and changes from the previous 12-month period for each end user. California moved up to 2nd highest among the contiguous states for commercial rates, but remained at 4th highest for residential and 2nd highest for industrial rates.