Below are the monthly updates from the most current January 2021 fuel price data (GasBuddy.com) and November 2020 electricity and natural gas price data (US Energy Information Administration).

Energy prices continued to climb as a result of the state’s regulations and energy policies, further raising cost barriers to jobs recovery and further burdening the 2.3 million workers still struggling to find jobs.

Fuel prices in both California and the rest of the US rose as supplies became tighter, with California now leading with the highest gasoline prices in the nation in December. As indicated in the chart, the state’s regulations make it more costly to produce and sell gasoline in California, resulting in prices that have been running an average of $1.08 a gallon higher since February compared to the average for the other states, and $1.36 higher when compared to the lowest cost state. As indicated in the 2019 results, prices in California are also far more variable as the state’s restrictions largely isolate our market from the broader US and world supplies, with even minor issues with in-state production reflected quickly into the in-state prices. 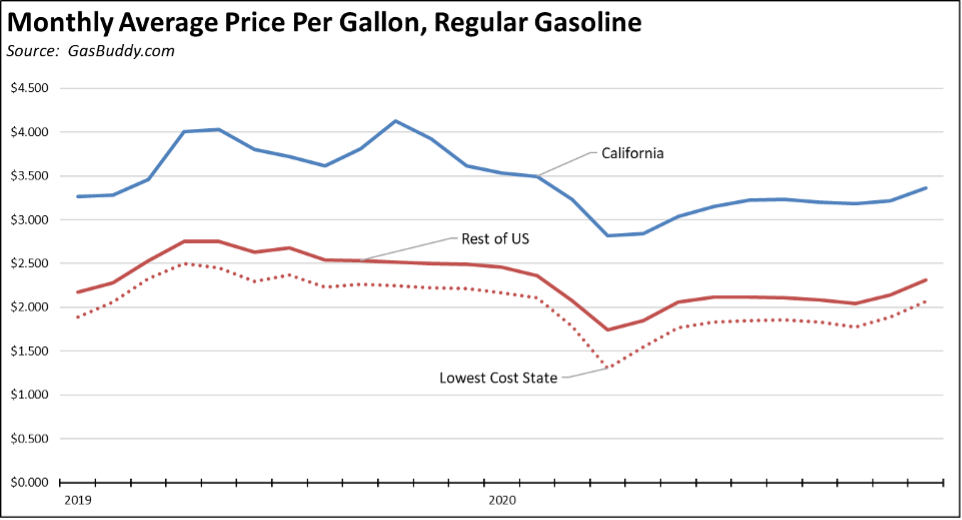 While under normal circumstances, these regulation-driven higher prices would affect the cost of living and disposable incomes more broadly, the current period is having the greatest effect on essential workers in particular those who are lower wage workers. As indicated in our latest monthly jobs report, higher wage jobs in industries with average annual wages above $100,000 grew in December to just 3.7% below their level in pre-pandemic February. Middle wage jobs ($50,000 to $100,000) were level at 5.3% below February. The job losses instead were concentrated in the lower wage industries (less than $50,000), with a drop to 11.8% below the February numbers. The higher and middle wage industries have experienced far lower negative job effects and in fact many have continued to grow in this period as a result of telecommuting. Gasoline prices consequently have had and will have fewer direct impacts at these higher wage and income levels because of sharply lower commute use. Lower wage workers with their continued dependence on vehicles and increasingly single occupant vehicles have been and will continue to be saddled with these high-cost results from the state’s approach to its climate change strategies.

The state’s expectations for mass transit and its dominance within the climate change strategies provide no answer. Even prior to the pandemic, US Department of Transportation data shows transit ridership as measured by unlinked passenger trips (UPT) dropped 16% between 2008 and 2019, even though $39.6 billion in state, federal, and local funds were spent to improve and expand transit availability in this period. In the current pandemic period, transit use plunged another 72% by May from its already-low 2019 average, and previous riders are likely to be reluctant to return to a dependence on these systems for some time to come even if the systems were capable of serving their needs given the expanding disconnects driven by the state’s dysfunctional housing supply policies.

The high cost of fuels is also likely to play a role in future telecommuting decisions by individual workers as well. Telecommuting expanded quickly as a standard work arrangement in the current pandemic conditions. Commuting in this state has been an increasingly lengthy and personally demanding activity. The state’s regulations on fuels means it is an increasingly costly one as well. Middle and higher wage workers now have the option to minimize those costs by continuing to telecommute while living in the state in the post-pandemic period, or forego those higher costs entirely by moving to other states while maintaining their jobs, careers, and higher incomes. Based on the 2019 numbers, another 2 million plus lower wage workers could have this telecommuting option as well, but lack of regulatory flexibility of the type now only available to government workers limits its extension to these income levels.

Electricity prices also continue to rise, driven by the state’s policies and regulations on this essential energy source. For residents, these prices increase the cost of monthly utility bills and consequently the cost of housing even as the most recent Household Pulse Survey by the Census Bureau indicates 40.3% of California adults live in households where it has been somewhat or very difficult to pay for usual household expenses (vs. 35.1% for the US), and 7.5% are in households which are not current on rent or mortgage payments or that have slight or no confidence they can pay the next month’s charges on time (vs. 8.9% for the US). The focus of the governor and the legislature has been on rents and the number of households who are unable to pay rent as a result of the job closures ordered by the state. But energy costs in the form of electricity and natural gas bills also make up a large share of total housing costs, in 2019 ranging from an estimated 3.7% of total housing costs for the average income homeowner in San Francisco to 12.7% in Stanislaus County and up to just over 17% in Imperial County, and from 3.5% for San Francisco to 16.9% in Fresno County and up to just over 26% in Imperial for the average income renter. Rents are being addressed. The housing component being driven ever higher by state regulations is not.

In 2010, when the state’s climate change program began with the AB 32 early action items, the average California electricity bill was 27% below the average for the other states, and produced one of the few cost advantages of living in California—lower utility bills as a result of its milder climate. In the latest results below, the average California bill is now only $13 below the other states—the elimination of one of the state’s few cost advantages as state regulations have ceaselessly driven the prices higher and in the process driven up the already escalating housing costs in the state.

The same increases are seen in commercial and industrial rates as well. Counting in both the unemployed and those who have left the labor force, the December numbers show there are 2.3 million Californians without jobs. The most recent projections from Department of Finance do not expect employment and jobs to recover until 2025, and these projections were done before even stricter measures were imposed at the end of year during the season on which many small businesses rely to produce the operating cash needed to continue operating for another year. Many businesses who were temporarily closed or operating at reduced levels were consequently financially weakened at their most critical point.

Commercial electricity rates are now the highest among the contiguous states, and industrial rates are below only those of the manufacturing powerhouse of Rhode Island. For the 12 months ending November, California businesses paid $1.4 billion more solely from the regulation-driven increase in rates during this period. And as these rates continue to rise, this amount represents a growing barrier to jobs recovery that dwarfs the amounts proposed in the January budget to help reopen jobs, before even beginning to take into account the higher costs driven by regulations for natural gas, gasoline, diesel, and the effect of these higher costs along the supply and distribution chains.

Between November 2010 and 2020, average commercial electricity rates grew 38% in California and only 1% in the other states. Industrial rates grew 46% while dropping 5% in the rest of the US. Natural gas prices show a similar but wider spread at 18% rise vs. a 24% drop for commercial and 7% rise vs. a 46% drop for industrial. Even companies that are not as affected by energy prices because they choose to generate their own through renewables—including Tesla’s intention to rely on 100% renewables for their gigafactories and Digital Realty’s goal of 70% of renewable power for their data centers—are going to other states where that generation can be done cost effectively and where construction of that generation can be done in accordance with production needs rather than driven as they are in California by a lengthy, disjointed, and litigation-prone permitting and CEQA process.

California claims to be a leader on climate change, but the results of its regulation-heavy approach are little different from the emission reductions achieved in the same period by the other states. California instead has led on the cost of those emission reductions, resulting in additional burdens to its soaring costs of housing, additional economic harm to those workers hit hardest in the current recession, and additional barriers the state has put in place for the recovery of its businesses and jobs.

California vs. US Fuel Price Gap at 45.6% Premium

The January average price per gallon of regular gasoline in California rose 15 cents from December to $3.36. The California premium above the average for the US other than California ($2.31) eased to $1.05 cents, a 45.6% difference.

In January, California had the highest gasoline price among the states and DC. Californians paid $1.29 a gallon more than consumers in Mississippi, the state with the lowest price.

The January average price per gallon of diesel in California rose 11 cents from December to $3.54. The California premium above the average for the US other than California ($2.57) eased to 97.1 cents, a 37.8% difference.

In January, California had the 2nd highest diesel price among the states and DC, behind only Hawaii.

$1.15
Price Per Gallon
Above US Average
(Central Sierra Region)

California average Residential Price for the 12 months ended November 2020 was 20.40 cents/kWh, 60.9% higher than the US average of 12.68 cents/kWh for all states other than California. California’s residential prices remained the 6th highest in the nation.

For the 12 months ended November 2020, the average annual Residential electricity bill in California was $1389, or 39.7% higher ($395) than the comparable bill in 2010 (the year the AB 32 implementation began with the Early Action items). In this same period, the average US (less CA) electricity bill for all the other states grew only 2.7% ($37).

$7.3b
Premium Above
US Average Price

For the 12 months ended November 2020, California’s higher electricity prices translated into Residential ratepayers paying $7.3 billion more than the average ratepayers elsewhere in the US using the same amount of energy. Compared to the lowest cost state, ratepayers paid $10.3 billion more.

California average Commercial Price for the 12 months ended November 2020 was 17.59 cents/kWh, 75.9% higher than the US average of 10.00 cents/kWh for all states other than California. California’s commercial prices remained the 3rd highest in the nation and the highest among the contiguous states. Only Alaska and Hawaii had higher commercial prices.

California average Industrial Price for the 12 months ended November 2020 was 14.37 cents/kWh, 129.9% higher than the US average of 6.25 cents/kWh for all states other than California. California’s industrial prices remained the 4th highest in the nation. Among the contiguous states, only Rhode Island had higher industrial prices.

$11.8b
Premium Above
US Average Price

Average prices ($ per thousand cubic feet) for the 12 months ended November 2020 and changes from the previous 12-month period for each end user: